Aiming for a better tomorrow 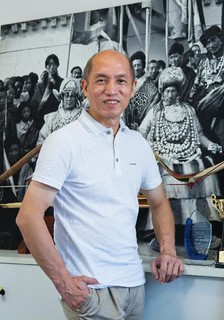 During a chance campus visit, Mr Wong learned that some high-achieving students could not attend overseas programmes because of financial difficulties.

Born into a family of Chinese chiropractors, Mr Wong Tin-chee has been immersed for many years in the culture of Chinese medicine and martial arts, which has imbued in him a deep admiration for traditional Chinese culture and thought.

When he was young, he fell seriously ill. He spent around two years in hospital, an experience that showed him that health is the most important part of one’s life. He took up martial arts after he recovered from this life-threatening condition. Believing that “prevention is the best medicine,” he became a registered practitioner of Chinese medicine.

Mr Wong’s mother, as a traditional chiropractor, needed to massage patients’ muscles during treatment. After doing this job for many years, her thumbs became misshapen. Seeing her discomfort, Mr Wong was inspired to develop a series of health-aid products aimed at helping urban dwellers prevent some general diseases from developing into serious illnesses.

As a lover of Chinese culture, Mr Wong loves to practice Tai Chi. In fact, he won the national championship in a Yang-style Tai Chi sword competition. In recent years, he has also become deeply interested in archery.

“Archery is one of the six classical Chinese arts, which includes rites, music, archery, charioteering, calligraphy, and mathematics,” says Mr Wong. “It is a sport that requires physical strength, robust levels of concentration and acute judgement. It teaches me about life.”

He adds: “An old Chinese saying remarks that you can appreciate a person’s virtue and his state of mind by carefully observing his archery skills. Also, practicing archery and reviewing our performance can help identify problems and improve.”

The concept of understanding a person by careful observation can also be applied to business management, Mr Wong says. He points out that management should not simply look at the business results. A management team should carefully analyse the unique culture present within its company environment and seek to introduce specific measures for improving all aspects of operations.

As a philanthropist, Mr Wong targets the exact needs of the less fortunate. For instance, serious flooding in eastern China in 1991 prompted Mr Wong to start up his own philanthropic work. Witnessing the aftermath of the floods, he realised the importance of prompt relief and urged follow-up rehabilitation and counselling services. So, in 1994, he established the Caring for Children Foundation and launched an education programme aimed at building schools and offering mental health counselling services in the mainland.

CityU is incredibly lucky to have Mr Wong involved in its operations. During a chance campus visit, Mr Wong learned that some high-achieving students could not attend overseas programmes because of financial difficulties. Thus, Mr Wong made a generous donation to set up a scholarship.

“I was deeply moved by how CityU teachers and staff care for their students. Their dedication showed me that CityU is an institution that is highly concerned about students,” he says.

“Donating to a worthy cause is very rewarding, not only for the recipient, but also for the donor,” Mr Wong says.