A delegation of senior officers from 12 universities in the UK held discussions with senior management from City University of Hong Kong (CityU) on fostering long-term partnerships at a meeting organized by the External Liaison and Cooperation Office on 28 November.

The aim of the visit was to build stronger ties following the signing of the first HK-UK Memorandum of Understanding on the Internationlization of Higher Education between local University Grants Committee funded universities and the UK higher education sector in November last year.

In his welcoming message, Professor H K Chang, University President, discussed CityU's past developments—from its initial establishment and its expansion into a fully-fledged university to its recent success at jumping 20 places to 154th in the recent Times Higher Education Supplement 2006 World University Rankings.

Professor Chang also emphasized the internationalization aspect of CityU's mission. "We are committed to building alliances with institutions inside and outside mainland China, and developing Hong Kong as the hub of higher education," Professor Chang said. "Our efforts include increasing the number of outbound students, welcoming students from outside, faculty exchanges, and all kinds of joint programmes and projects."

CityU had taken measures to expand its internationalization programmes, Professor Chang added, including setting up a range of student exchange agreements and collaboration projects with overseas partners.

"We are in the city, of the city and for the city," he said, highlighting CityU's geography, history and culture. "We uphold the mission of nurturing the younger generation of the Hong Kong community and we are proud that we have turned many students into professionals for the well being of society," he said.

The UK guests had the opportunity to discuss whole-person development, the curriculum, applied research and technology transfer with CityU's senior officers and faculty. They later visited the School of Creative Media and the Wireless Communications Research Centre.

The delegation was impressed by the University's achievements, which, it was noted, had taken place in short space of time. 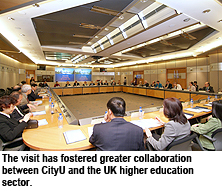 Professor Glynis Breakwell, Vice-Chancellor of the University of Bath, said the visit symbolized the close relationship between Hong Kong and UK institutions, and it would pave the way for further collaborations.

CityU has been proactive in developing such collaborations. To date, it has signed student exchange agreements, articulation programmes, placements and joint programmes with more than 30 universities in the UK.

During their three-day visit to Hong Kong, the UK delegates also met senior representatives from the University Grants Committee, the British Council and local universities.