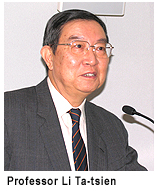 Professor Li Ta-tsien, one of the most renowned mathematicians on the mainland, delivered the fourth lecture of the William Benter Distinguished Lecture Series at CityU on 25 January. The annual lecture series, launched by CityU’s Liu Bie Ju Centre for Mathematical Sciences (the Centre), reinforces the University’s reputation as a leading centre in pure and applied mathematics research.

The William Benter Distinguished Lecture Series brings to CityU internationally recognized mathematicians annually, with the aim of making available to pure and applied mathematicians the latest results and thinking of the speakers in their areas of outstanding research.  The lecture series is organized by Professor Roderick Wong, the Centre’s Director, and Professor Philippe G Ciarlet, the Centre’s Deputy Director. Both are Chair Professors of the Department of Mathematics. 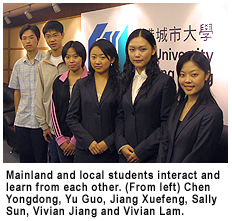 Professor Li, a professor at in , is famous for combining basic mathematical theories with practical applications. In his lecture entitled “Controllability and Observability for Quasilinear Hyperbolic Systems”, Professor Li presented a direct and unified method to establish both the controllability and the observability for one-dimensional quasilinear hyperbolic systems by means of the theory of semiglobal classical solutions. The lecture attracted a full house of audience at the conference room of the Faculty of Science and Engineering. 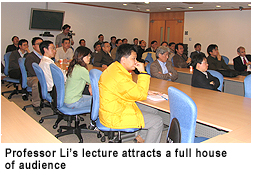 Among the numerous prizes and awards Professor Li has received are: a Second Prize and a Third Prize of the State Natural Science Awards; a First Prize and two Second Prizes of Scientific and Technological Progress Awards from the State Education Commission. Two of his works have received accolade as Excellent University Textbooks of the State.

The Centre also organizes major international conferences, workshops and colloquiums to facilitate and promote academic and professional exchanges in pure and applied mathematics.