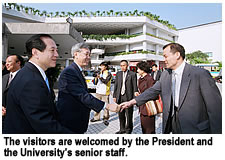 The visitors from Beijing, also included: Mr Chen Kongfu, Member of the Standing Committee of the Chinese People’s Political Consultative Conference (CPPCC) and Deputy Secretary-General of Standing Committee of the CPPCC; Professor Wang Zhizhen, Research Fellow of the Institute of Biophysics, Chinese Academy of Sciences and Fellow of the Chinese Academy of Sciences; Mr Xiao Ziren, Vice-Chairman of the Chinese Medical Society and Vice-President of the Wu Jieping Medical Foundation; and Professor Yuan Ming, Director of the Institute of International Relations, Peking University. On hand to greet them were: Professor Edmond Ko, Vice-President (Undergraduate Education) and Dean of Students; Mr James Ng, Executive Director of CityU Extension, Dr Jerry Yu, Chief Information Officer, Dr Zhu Guobing, Director of the External Liaison and Cooperation Office, and the Deans/Directors of CityU's Faculties and Schools.

A bridge for the transmission of knowledge

Professor Chang elaborated, saying that underpinning CityU's academic collaboration with universities worldwide is his strong belief that universities serve not only the community, but also the education needs of the mainland. While CityU continues in its role as a bridge for the transmission of knowledge in Asia, he envisages increasing trilateral collaboration among CityU, mainland Chinese and overseas universities in the future.

Professor Han, who is also Vice President of Peking University, expressed respect for CityU’s remarkable achievements within the past two decades, in particular the broad range of educational opportunities and its innovative approaches to facilitating learning. He expressed his gratitude for the friendly reception and his anticipation of closer collaboration with CityU to nurture talent for and the 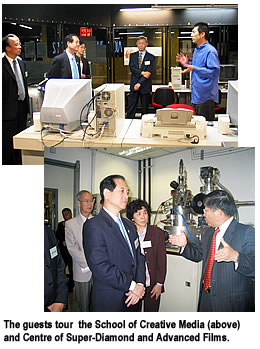 After the presentation, the visitors enjoyed a tour of the School of Creative Media (SCM) and the Centre of Super-Diamond and Advanced Films. At the , the guests heard about the facilities and plans for the Creative Media Centre as an inspiring building that will mark ’s leading position in creative media education. The guests were also treated to a screening of two award-winning videos produced by SCM students. At the Centre of Super-Diamond and Advanced Films, the guests were introduced to the latest nanotechnology research.