"Turn One to Five" -- Rejoicing in the successful donation drive 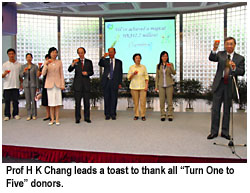 The joy of giving prevailed at the “Turn One to Five” tea reception held in the Purple Zone of the University Concourse, 21 September. Some 150 staff and students attending the tea reception shared the success of the staff fund-raising campaign. The campaign raised donations amounting to HK$12.2 million for the University.

“For quite some time, we looked for a miracle. But we didn’t realize the miracle was within ourselves,” said Professor H K Chang at the tea reception. “As a scientist, I’ve never clearly understood the chemical formula of 'Turn One to Five', but I know somewhere here in our hearts, we have the desire to make CityU a better place. The campaign was so well responded to by so many staff and students, and that warmth and encouragement really gives me the courage and strength to continue seeking support from prestigious donors.” 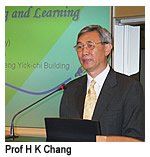 In July last year, the Government introduced the Matching Grant Scheme to encourage UGC-funded institutions to solicit donations from their own benefactors. The Development and Alumni Relations Office (DAO) launched the "Turn One to Five" donation drive in late December 2003 to encouarge staff to contribute for the University. Nearly 800 staff members from all levels of academic and administrative departments and many students contributed, and the total amount received was more than HK$2.2 million. According to the formula, that sum was added to another HK$5 million from three generous private donors. With the Government’s matching grant of HK$5 million, the "Turn One to Five" campaign 'magically' generated the grand total of HK$12.2 million for the University.

“I hope we can keep the chemistry alive and work together in the coming months and years, not necessarily doing fundraising, but anything for the well-being of the University and the community. I hope we can keep this magic formula,” Professor Chang urged. He

particularly thanked the students for their support.

CityU's staff giving culture echoes the generosity of other internal and external sponsors. As one of the staff members enjoying the reception,  School of Creative Media Professor Mark Green said, “we are very pleased to see the magic of ‘Turn One to Five’, which actually is ‘turn one to more’.” The internal donation culture makes known to the public that we are committed to the well-being of our students. "That spirit has contributed to attracting external sponsorship for our students’ participation in international competitions in , the , and the mainland," he said.

Miss Shum Wai-yan,  DAO's Clerical Officer and Fundraising Ambassador, said, “CityU is the place where I developed my career and acquired my undergraduate degree. Giving to the University is my great pleasure, especially when I know my contribution can help shape its future, such as in research, and benefits the university's reputation in the community.” Miss Shum expressed her thanks to the University for giving her the opportunity to learn on the job and complete her Bachelor’s degree, which was her late father’s wish. She hopes there will be more fund-raising channels in the future to maintain the momentum of “Turn One to Five”.

Mr Kelvin Chan, President of the Students’ Union (SU), said, “The staff and alumni have set a very good example for us. The total sum raised through the staff giving campaign is remarkable. 'Turn One to Five' has been a great success, and we hope to encourage more staff and students participation in forthcoming 20th anniversary activities, such as the 'Proud of 20' walk and the CityU Banquet.” Inspired by the spirit of generosity, the SU has helped in calling alumni to promote the Alumni Giving Club. They also took the initiative to participate in fund-raising activities over the past year, including a hostel-wide donation drive and a mini-concert night. The tea reception ended with toasts by the President, departmental Fundraising Ambassadors and other Guests of Honour, including: Professor Edmond Ko, Vice President (Undergraduate Education) and Dean of Students; and Dr J T Yu, Chief Information Officer. Ms Kathy Chan, Acting Director of the DAO, remarked that “Turn One to

Five” was a manifestation of the solidarity of CityU. She expressed thanks to the donors, Donation Ambassadors, the Enterprise Solutions Unit, the Finance Office, and the Office of the Chief Information Officer. She also expressed gratitude for the precedent set by Professor Chang who sparked off the donation drive last December. “With our concerted efforts, something impossible can be possible,” she said.