In a whirlwind trip to Beijing, a CityU delegation led by Professor H K Chang further strengthened the University’s collaboration with mainland partners in the areas of the humanities, social sciences, media and communications. 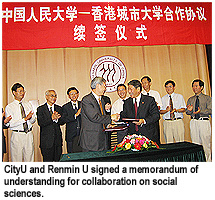 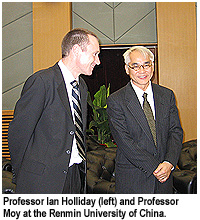 Professor Yu and Professor Yang Ruilong, the RUC's Dean of the discussed the direction of future collaboration in the area of economics. The two universities will consider taking turns to: organize international conferences; arrange  student exchanges and short study courses for undergraduates in each other’s institutions. Joining hands with the RUC to organize international conferences is not new to CityU's EF. In 2002, the EF and RUC jointly organized the International Conference in Honour of Gregory Chow: China and the World Economy. To further explore opportunities for cooperation with the RUC in the areas of economics and finance, Professor Yu plans to visit Professor Chen Yulu, Dean of the RUC's , later this month.

The RUC is a key national comprehensive university on the mainland focusing on humanities, social sciences and the science of management. CityU enjoys a longstanding friendship with the RUC dating back to 1993. The two universities have been arranging student exchanges and staff visits in addition to the LLM degree jointly offered by their Schools of Law. “The establishment of a closer relationship with a reputable university on the mainland like the RUC is encouraging to CityU,” Dr Zhu said. 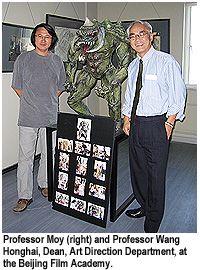 The trip also offered Professor Moy a chance to visit the BFA, a participating institution in the Trilateral Partnership established in July among CityU, BFA and the School of Cinema-Television of University of Southern California. “The visit was very productive. It cemented our relationship,” Professor Moy said. “We’ve started to plan for a summer institute in 2005 for students from all of and the ,” he added. Professor Moy hopes to invite eight to nine people from BFA, USC, CityU and the local film industry to teach in the institute. Having visited the USC in August and now the BFA, Professor Moy is confident that future collaboration under the trilateral partnership will be rewarding.

Regarding the future development of collaborative relationships, Dr Zhu said, CityU plans to continue to focus on promoting “strength to strength collaboration” by identifying partners whose strengths are 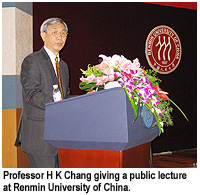 compatible with the University. “This will not only facilitate CityU's advancement in its existing areas of strength, but also provide more room for staff to excel,” he said.

In addition to visiting various faculties, Professor Chang also gave a public lecture called “From Movable Type to World Wide Web” during his visit to the RUC. Before joining the CityU delegation, Professor Chang spoke on the same topic at the Cultural Summit 2004 organized by the China Culture Promotion Society (CCPS), to promote Chinese culture and international cultural exchange, 3-5 September.