Secondary students flock to IT workshops

Over 450 Form 7 students flocked to the IT workshops offered by CityU's Division of Computer Studies (DCO), from 20 July to 8 August. They gained hands-on experience working with programmes such as Java and Maya and got a taste of what the University's computer laboratories are like.

Some participants were amazed at what they could accomplish using the programmes they learned in the workshops.“I am impressed with the teaching facilities here. The software is very powerful and I could use it to design a house. Now I feel that I can work wonders with the click of my fingers,” said a participant who has learned to use Maya to create a graphical object. 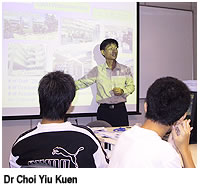 Co-ordinator Mr Kenny Ma, DCO Lecturer, attributed the satisfactory enrolment to the popular demand for the topics introduced in the workshops, which included Internet Security, Programming with Java, Linux administration, and creating 3D Graphics with Maya.  This year's enrolment was even more impressive when compared with last year's 80 participants—enrolment increased more than four-fold. “We expanded our list of topics, which definitely attracted more participants,” said Mr Ma, who also attributed the remarkable growth to a “post-SARS” phenomenon.

Graduates help highschoolers
“We organize this kind of training to build ties with secondary schools,” said DCO Acting Head Dr Charlie Choi Yiu-kuen. “Apart from generating the participants’ enthusiasm for the subject content, we also take the opportunity to brief them on the prospect of studying IT and on our Division’s commitment to quality education.” 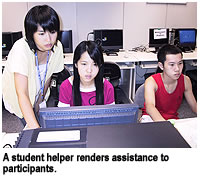 Support from nine teaching staff and 10 graduates from the Division were enlisted to run the workshops. While teaching staff took the lead introducing the University and the Division, the graduate students played a significant role in facilitating the training sessions. “Graduates were recruited to help with teaching and training the younger participants,” said Dr Choi.“This creates a win-win situation. Our student helpers learn the basics of teaching; secondary students learn from the experience of university graduates; and the Division builds community spirit between the two groups of students.