"I'm sorry, but I don't care how hard my friends are studying, or what my Uncles think I should do.  Shouldn't I be true to myself, as you taught me?" It wasn't the first time teenaged C Raj Kumar had faced a challenge, nor was it the first time he would emerge victorious. His mother, a doctor, listened with a twinkle in her eyes. "Son, obviously your values are strong, and we are very proud of you. The legal profession may not be as popular as medicine, but you will succeed in whatever you set your mind to." His parents hugged him. "You're just like me when I was your age," his father, a professor, laughed ...

Born into a middle-class family and raised in Chennai, India, leadership came naturally to Raj. Although his friends often chided him for not concentrating on his studies, Raj did well academically and managed to enjoy multifarious extra-curricular activities. He was Captain of his school's junior and senior cricket teams, and then, involved in the National Cadet Corps and Blood Donation Camps. Later, as a university undergraduate, he was elected as the Secretary of the Commerce Association in the Loyola College and, after entering the Faculty of Law, University of Delhi, he was twice nominated for the 'President of India Gold Medal'.

Mr C Raj Kumar, Lecturer in the School of Law and Deputy Director of the WTO Law and Dispute Resolution Centre, and winner of a prestigious research grant from the Sumitomo Foundation, Japan, has just completed an important research project entitled Corruption and Human Rights -- Promoting Transparency in Governance in Hong Kong, Japan and India. The research grant was awarded to Mr Kumar in the category of 'Fiscal 2002 Grant for Japan-Related Research Projects'. Mr Kumar was a Rhodes Scholar at the University of Oxford, a Landon H Gammon Fellow at the Harvard Law School, and obtained Master's degrees in

Law from both Oxford and Harvard Universities.

He already has published three articles based upon his corruption research stemming from the Sumitomo grant, in leading American law journals: The Columbia Journal of Asian Law; The New England Journal of International and Comparative Law; and The San Diego International Law Journal, in addition to nearly twenty other publications on international human rights law, law and development, and law and governance

In the course of his research on corruption, Mr Kumar had discussions with judges, professors, politicians, economists, public policy administrators, representatives of the media and non-governmental organisations and other sectors of society in Hong Kong, India, and Japan. Mr Kumar also met with the 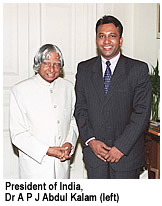 President of India, Dr A P J Abdul Kalam and the Chief Justice of the Court of Final Appeal in Hong Kong, Andrew Li, as well as senior functionaries of the United Nations offices in New York and Vienna.

The right to good governance

Conducted from April 2003 to May 2004, his research examines the laws, rules, regulations, institutions and other mechanisms prevailing in Hong Kong, India and Japan that prevent corruption and, at the same time, promote transparency and accountability in governance. The project was conducted on the basis of the comparative experiences of promoting transparency in governance policies from a human rights perspective, so as to argue for the development of a human right to good governance. The human right to good governance would encompass rights relating to promotion of transparency and accountability at all levels of decision-making in government as well as the private sector in Japan, Hong Kong and India.

Testimony to his scholarship in this area, Mr Kumar has been  invited by the United Nations University to participate in a research project organised by the International Institute for Ethics, Law and Governance, at Griffith University, Canberra, Australia, in April 2005. Mr Kumar will speak on how corruption affects national sovereignty and his paper will form part of a collection of essays to be published as a book.

An active role in Hong Kong

"I would like to continue to play an active role in the community in Hong Kong and continue my human rights-related work concerning India and elsewhere. I love Hong Kong," Raj explains with his characteristic warmth. "It holds great potential for development."

Meanwhile, Raj is also a family man and the proud father of a baby boy, Abhimanyu, born here on 20 January. "My wife, Pratibha, is also a Lawyer. We even obtained the same degrees (LLB from Delhi, BCL from Oxford and LLM from Harvard). We met as students at Delhi in 1997, continued our higher education together and got married in July 2000." After Harvard, Pratibha joined the international law firm of Sullivan & Cromwell and she is currently employed in their Hong Kong office.

"What is most important to me is never to stagnate, to remain committed to the work I do, and constantly assess what contribution I am making to society," says Raj. "Is what I do of any use, whatsoever? As long as I get a 'yes' to this question, I will continue to work! While predicting the future is the job of astrologers, I can say that human rights work will become a greater part of my life in the years to come, whether it is via legal scholarship and academia, or working in the public forum in various other capacities."

'Change', 'commitment', 'contribute', 'continue' — there is more than one meaning for the capital 'c' in C Raj Kumar.