The City University of Hong Kong Press (CityU Press) is presenting 65 titles at s 15th annual Book Fair, 21-26 July. Three were selected by book critics as among this year's "40 Good Books," and four are hot-off-the-press.

"The Hong Kong Book Fair is an important event for CityU Press and s publishing industry as a whole," said Mr Patrick Kwong, Director of the CityU Press. "The Fair attracts 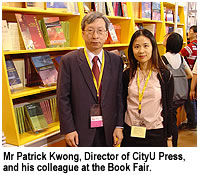 about 400,000 book lovers from , the mainland and all over the world each year. It is the best opportunity for our books to meet readers," he added.

One of CityU Press's major attractions this year is the newly launched "East and South East Asia Series". The Series Editor, Professor (Chair) Joseph Cheng of the Department of Public and Social Administration, pointed out that although is an important financial centre and an international city, people here have little knowledge about neighbouring countries. To help bridge the gap, CityU set up a Bachelor of Social Science

with Honours in East and Southeast Asian Studies programme in 2000, and the Southeast Asia Research Centre in 2001. "We hope the series of books will encourage an interest in the politics, society and culture of the region, especially among university students," Professor Cheng said. The first three of the 11-volume series, Understanding , Understanding and Understanding Singapore, were published 21 July to debut at the Book Fair. The series will also include volumes about , , , , , the , and . 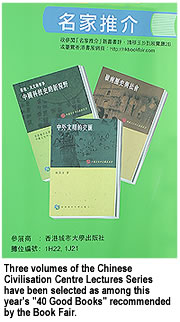 Cultural Interaction; and Lingnan: History and Society, were chosen to feature among this year's "40 Good Books," a major Book Fair activity organized by the Hong Kong Book Fair and Hong Kong Arts Council since 2001. Book critic Mr Hung Ching Tin believes that the beauty of the selected books is that they are based on lectures given by well respected experts and scholars. "They can play the role as the best beginner’s guide to Chinese culture and civilisation. But they are more than a beginner’s guide. They take readers to a much wider and deeper world." Newly available at the Book Fair is the sixth title in the series, Poetic Reminiscence: Professor Yeh Chia-ying on Chinese Poetry, by Professor Yeh Chia-ying.

At the Book Fair, Mr Kwong met an American delegation of public and university librarians. "Their major purpose in coming here was to understand the Asian publishing market and to purchase books that will enhance their collections on Asian subjects. They showed great interest in our Chinese Civilisation Centre Lecture Series," he said.