Philosophy a hit with SCM students 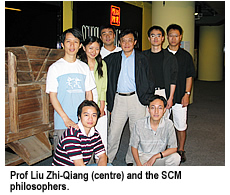 High-flying postgraduates from the School of Creative Media (SCM) are

The students, training for careers in the world of computer technology and

creative arts, embarked upon their literary odyssey with 'Wisdom of the West', by Bertrand Russell, winner of the Nobel Prize for Literature in 1950 . “We want to discuss more than just our research topics,” said Professor Liu, who started the club last December. Motivating him is the desire to see students push themselves to develop a more rounded education.

Professor Liu, a computer science expert with a PhD in electrical engineering

from The University of Alberta, , is keen to see his students immerse

themselves in the humanities as well as technology. “We want to nurture

students to be more cultural, not to be just hard-core technologists.” So far, these literary events have proved innovative. “We can sit together and have a relaxing chat and have time to absorb new knowledge,” said Zhang Si-cheng, a PhD student working on computer vision.

set text. “We give a PowerPoint slide show and then just start chatting,” said

Wang Yi, a graduate of and now at CityU researching

computer programmes that explore human motion. Sessions are conducted in English, providing students with a forum to practice linguistic as well as analytical skills.

Wrestling with western and eastern thought

and culture was not too difficult to digest, even though none of them had

studied western civilization in any great depth before. After spending three months working through Russell, club members felt they needed to wrestle with eastern thought and culture. They turned to 'Chinese Culture', edited by Professor Cheng Pei-kai, the cultural historian and poet who heads CityU’s Chinese Civilisation Centre. “It [Chinese Culture] is accurate and up-to-date,” Professor Liu said. “There are many books like this on the market, but I trust this the most.”

around the humanities is not simply an exercise in whole person

development, one of the University’s core educational values. Investigating

perspectives on research, Professor Liu argues. As an example he cites how the study of the contents of Chinese tombs can reveal interesting and ‘original’ designs. “We don’t just see these things as old but as inspirations for creativity,” Professor Liu said.

stories, to drag themselves away from their PCs and to exchange ideas. “Everyone knows something, but not everyone knows everything,” Zhang Si-cheng said.