Commitments from all sides to rein in deficits

The education sector, Financial Secretary The Hon Henry Tang said, is not expected to meet the 11% across-the-board cut he proposed for all the other major 2005-08 outlays, to help the government tackle its growing budget deficits. He also promised that he will promptly discuss with Professor Arthur Li, Secretary for Manpower and Education, government allocations to the local universities in the 2005-08 triennium. 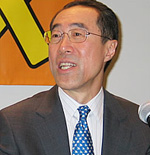 Speaking in a seminar at CityU this afternoon, Mr Tang addressed an over 250-strong assembly representing medical workers, social workers, the handicapped, tertiary educators and various shades of unionists, just before the Chief Executive unveils his Policy Address 7 January. This "town hall" meeting, where Tang met the people to explain his principles in managing public finances, may give us an inkling of his Budget Address in March this year. Mr Tang reiterated that the SAR government would regard education as an investment and spending cuts in this area will not be as "stringent" as in the other expenditure areas. He promised to listen to the various opinions expressed. During the open forum, Tang had an earful of concerns from a wide spectrum of people who would feel the painful pinch of a substantial cut-back in government-funded services, including university education. 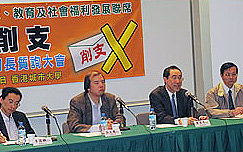 On education, particularly higher education, the audience--students from , and representatives of the tertiary workers union--spoke from the floor one after another on the likely adverse effects of further resources cuts in local tertiary education. For students and parents, the impending cuts will increase the share of cost they have to bear in receiving education, getting them deeper in debt through loans, trapping them in financial difficulties. Some students fear the closing down of entire academic disciplines or departments as universities struggle to make ends meet. Staff, particularly those rank and file members, fear further job losses, a heavier workload and an insecure future. Some suggested cost-saving options such as cutting back on non-recurrent expenses in education, including construction and improvement projects, hitting hard on waste and unnecessary expenses, instead of just focusing on recurrent expenses, which are largely staff salaries.

Regarding the concern that a likely increase in tuition fees will make it more difficult for students and parents to afford tertiary education, he reaffirmed that the government policy is to make sure "no one will be deprived of the opportunity for access to local colleges and university just because of financial reasons." He hinted that Professor Li is in the process of reviewing the mechanism and the amount of government financial assistance in the forms of loans and grants. Lastly, he explained, the government will refrain from making or imposing decisions that undermine the academic freedom and autonomy now enjoyed by the local universities. The government, he said, has long allocated money to the universities through the "buffer" of the University Grants Committee. The universities will make their own decisions on how and where to use the allocations--which academic disciplines to boost into areas of excellence and which areas to trim back.

Mr Tang also explained that managing public finances is all about making choices; meeting incessant demands with limited resources. Eradicating budget deficits is a priority that the general public and the business community expects of him. Towards meeting this difficult goal, he said, he expects commitments from all sides--the government, the community and individuals.