The Language Engineering Laboratory led by Professor (Chair) William S Y Wang in CityU's Department of Electronic Engineering, and the Department of Chinese, Translation and Linguistics, is collaborating with the Santa Fe Institute (SFI) on studies of the emergence of language. 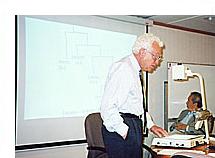 A private, non-profit, research and education center in New Mexico, SFI emphasizes multidisciplinary collaboration and focuses on the studies of complexity and complex adaptive systems. With the support of the John D and Catherine T MacArthur Foundation, SFI Distinguished Fellow and 1969 Nobel Laureate in Physics Murray Gell-Mann led a five-year research project on the long-range relationships of human languages. Professor William Wang , who specializes in the evolution of language, serves as a member of the Advisory Board of the SFI research project. Professor Gell-Mann joined Professor Wang as a co-investigator via a Research Grants Council-funded project called "The Position of Chinese among the Language of Asia".

"The project, which aims to define the position of the Chinese language within the context of the languages of Asia, will help advance theoretical understanding of how language evolves," Professor Wang said. "One of the major issues is to find out if language evolution in the Asian context, where close contact among numerous languages has persisted for many millennia, proceeds in the same way as it does in some other parts of the world with different geographical conditions and settlement patterns. This will contribute significantly to the SFI project on relationships of human languages."

In October, Professor Wang led a team of doctoral students and a Fellow in an SFI workshop on language acquisition. Participants explored the life of language from how it is acquired to how it becomes extinct. "I am really proud that our work at CityU received high commendations from international scholars at the workshop," Professor Wang said. One participant, Professor Luc Steels from Sony Research Centre, Paris, commented, "In addition to the two leading research centres in Paris and Edinburgh undertaking studies on the problems in language evolution, we see a third centre emerging at CityU."

The Language Engineering Laboratory aims to promote the advancement of knowledge of human language within an evolutionary perspective, using an interdisciplinary approach. In addition to focusing on historical linguistics, the Laboratory adopts computational modeling of the acquisition, change and emergence of language. "Language is a typical complex system. We believe it can be explored by using simulation models that are often adopted in the study of complex adaptive systems in Physics, Biology and Economics," Professor Wang explained.

mappings between meanings and signals, which are the results of conventions established among a population. In his studies, Professor Wang uses mathematical models and computer simulation to investigate how such conventions are formed. "We assume that primitive human beings did not share any language," Professor Wang said. "They made signals in response to the environment and each signal might refer to a complex mix of meanings." In the simulation model, Professor Wang assumed that different people used different signals to represent the same thing, but through interaction and imitation, an established convention was reached gradually. This accounted for the emergence of language. "The desire to interact is the very key to the emergence of language," he added. "When human beings have the desire to interact, they will try to adjust themselves to be better understood by others and to understand others better for their own benefit."

Further studies on language ambiguities, language changes and the impact of social structure on language emergence are being conducted using the simulation approach.