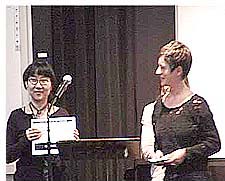 As Ms Caroline Hu Yee-man, a student in the School of Creative Media (SCM), rides through the city of Hong Kong on a ding ding (tram), memories and reflections are captured in her nine-minute experimental film, ReMembrance , which won her the Best Experimental Award in the 6th New York University International Student Film Festival (ISFF).

The ISFF, a bi-annual event, held by the Tisch School of the Art at New York University from 25-31 October, featured 108 short films by 60 budding directors from over 48 film schools around the world. Caroline, a Year 2 student of MFA Media Design and Technology, was one of the seven CityU SCM students whose works were selected for screening by the organizer. 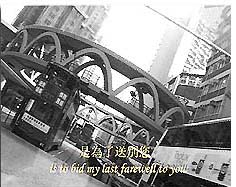 ReMembrance is Caroline's first video work at the SCM. A graduate in comparative literature, she adopted an interdisciplinary approach by incorporating the literary and cultural knowledge she learned from her first degree with the artistic and technical knowledge she gained from her SCM course in the production of ReMembrance . With the encouragement of her programme advisors, Dr Steve Fore , Associate Professor, and Miss Nancy Tong , Assistant Professor, Caroline submitted her work to the ISFF with the aim of enriching her learning experience. "I felt very honoured to be selected for screening and didn't expect to win the award and the US$1,000 prize," she said.

"To me, the international recognition of my work and the effort put into it is more important than the prize," said Caroline, who is delighted with the recognition she received from the Tisch School which has produced many renowned directors such as Ang Lee ( Crouching Tiger, Hidden Dragon ), Martin Scorsese ( Gangs of New York ), Oliver Stone ( Born on the Fourth of July ) and Chris Columbus ( Harry Potter and the Sorcerer's Stone ).

The ISFF, founded by the School in 1993, alternates between New York City and Florence, Italy, is the international counterpart to the Kanbar Institute of Film and Television's First Run Festival. Many of the films in these festivals go on to screen at top international film festivals, including Cannes, Toronto, Venice and Berlin. "The award proves that our School has works that are of high standard," said Karen McCann , Lecturer of SCM.

While the award has given Caroline a greater incentive to produce different types of film and more confidence to participate in other film festivals and contests, she said, "I do feel some added pressure because I have to not only keep to my standard but also, I hope, do better." 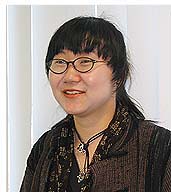 Caroline said she appreciated the support from SCM academics, who have given her a lot of insight and inspiration. She also appreciated the SCM's arrangement for postgraduate students to sit in on undergraduate courses. "If we want to learn, we have to take the initiative to ask questions and try things out," she said. "This is what university education is all about and we should not expect people to spoon feed us."

Caroline is now working part-time as a Project Manager in Videotage. She plans to stay on and further develop her career in the field, and is also looking for further study opportunities. "My trip to the New York University made me realize how much more there is to learn about the film business," she said. She has had a good start at the SCM and, with this foundation, wants to learn more about other areas in the industry.