In his distinguished lecture on 10 November, Professor Andrew Yao Chi-chih, the recipient of CityU's Honorary Doctor of Science Degree at its 18th Congregation, treated his audience of over 220 faculty members and students to an interesting talk on the use of computer theory as an elegant and powerful tool for solving intellectual scientific challenges.

Professor Yao has two PhDs, one in physics awarded by Harvard University and the other in computer science, awarded by the University of Illinois. He was the Year 2000 Winner of the A M Turing Award, widely regarded as the equivalent of the Nobel Prize in the field of computer science. A world-renowned computer scientist and currently the William and Edna Macaleer Professor of Engineering and Applied Science at Princeton University, Professor Yao has made fundamental contributions to the theory of computation, including the theory of pseudorandom number generation, cryptography, and communication complexity. In addition, he is a member of the US Academy of Sciences, Fellow of the of Arts and Sciences and a member of Academia Sinica.

Over the past three decades, computers and the Internet have co-evolved to become essential tools in all types of work, as well as critical parts of our daily lives. Playing an important role behind this development is a computing theory which both asks and solves new, fundamental questions posed by the technology. Professor Yao's lecture—The Enjoyment of Computing Theory—opened with a thought-provoking discussion on the relationship between computing theory and philosophy, applied mathematics, and physics. He then went on to give thorough explanations of the concepts of transfer of knowledge, random walks, and quantum computing. Professor Yao grabbed the attention of the audience, in particular, by citing extensively from chess games, card shuffling and tea tasting to illustrate, in practical terms, how computer science has provided many new intellectual challenges for different disciplines.

Professor Yao is a mathematical scientist who excels in both solving difficult problems and propounding interesting new ones. The latter is, of course, very important in catapulting new fields into mainstream study. He has not only helped shape the theory of computation over the last three decades, but has also made the theory an essential companion, at times even a precursor, to advances in technology. Professor Yao's research activities cover the design of efficient computer algorithms and complexity theories in emerging new areas of theoretical computer science, in particular quantum communication and computing. He is currently investigating new paradigms for designing fast quantum algorithms, and mathematical tools for the security analysis of quantum cryptographic protocols. 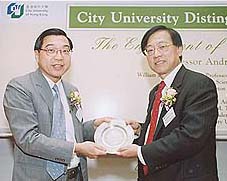 Professor Yao regards as his second home. He has visited CityU many times and hosted colloquiums on monotone circuit depth, communication complexity, and classical physics in October and November last year. In welcoming Professor Yao, Professor Roderick Wong, Dean of the Faculty of Science and Engineering, offered a personal anecdote to the audience. Professor Yao stayed in for a short time in the 1950s before his family migrated to . In a report by his local elementary school teacher in , Professor Yao was described as "an overall good student, just a little weak in mathematics". That little boy has proved the folly of too early judgment. 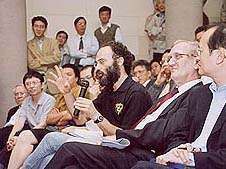 Professor Yao, when asked what qualities contributed to his being awarded the Turing Award, remarked that diligence played a very important part. He also encouraged undergraduates and research students to explore more deeply the ramifications of computing theory, in particular because developments in computing theory are relevant to so many scientific fields, especially engineering.

Professor was conferred Honorary Doctor of Science for his significant contributions to technological development and research excellence in computing at the fourth session of the Congregation on 12 November.