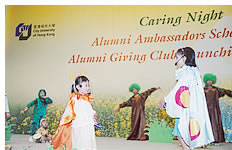 Over 1,000 alumni, their families, students and staff attended the Chan Tai Ho Multi-purpose Hall for Caring Night on 1 September. More than a homecoming gathering, the event marked the launch of two initiatives-the Alumni Ambassadors Scheme and Alumni Giving Club -- to realize the twin goals of "Caring by serving." and "Caring by Giving".

Caring Night, organized by the Development and Alumni Relations Office (DAO), included musical performances by the Alumni Band, and alumni and Cantonese pop singer Mr Edwin Siu. The evening's entertainment also featured a one-act play, "", performed by children of alumni. Mr Ricky Chu, 2001 MA International Business Management graduate whose five-year old daughter acted in the play commented, "This is the first time for me to take part in an alumni activity. It is so successful and encouraging. I think we should try our best to support our alma mater, be it in monetary or other terms." [more photos]

, President, addressed the audience, noting that CityU may not be able to catch up with the centennial universities in terms of history, "However, we can catch up in one area-the support and care that our alumni show for the University." CityU will soon be celebrating its 20th anniversary. In an economic downturn, what academic institutions need most is support. Professor Chang likened CityU's development to nurturing a tree or a person; when it reaches a certain stage of growth, it needs tender care and strong support to make sure it will continue to prosper. "Your participation tonight is a great encouragement to us all," he said. "It shows that you care about CityU. You are the people who will nurture the University's continuous growth."

At the Alumni Ambassadors Scheme launch, about 200 alumni ambassadors took a pledge, on behalf of the 423 ambassadors in total, to serve their alma mater and support CityU, a highlight of the gathering. Alumni Ambassadors are graduates who identify with the University mission and commit themselves to volunteer service to the University, helping organize alumni functions, mentoring students, and so on. Alumni Suzanne Cheung explained, "Ever since I graduated from CityU, I have been working all the time and I found that I had very little contact with my former classmates. I hope to gain more contact with them through being an ambassador. This is a helping club, too, so I hope I can help some newcomers. I believe I can help myself through helping others."

In addition to contributing time and effort to the University, alumni also extend financial support. The Caring Night witnessed the launch of the CityU Alumni Giving Club which was marked by a plant watering ceremony. The Club, which already has 310 members since it was launched in July, aims to encourage systematic and sustained support from alumni and friends. Alumni donations play an important role in helping the University to secure a share of the "Matching Fund", a government initiative to encourage more private donations to local universities. Starting , for every dollar CityU raises from the community and alumni, the University will have a chance to receive an equal amount from the Government.

The first round of applications for the grant closes at the end of December. The sense of urgency, however, is not lost on the alumni. "In less than a month, the Giving Club has raised a total of HK$700,000," Mr Andrew Fan, a representative of the Alumni Donations Committee, announced. Under the current arrangement, CityU alumni have, in effect, helped to raise HK$1.4 million for the University. "Success is not a destination but a journey," Mr Fan said. Be it ten dollars or one hundred, he encouraged alumni to continue to contribute for the good of the University. 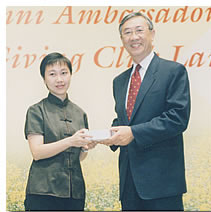 In recognition of their generosity, each of the five Founding Tree Members, Dr Ng Tat Lun 2001 LLM graduate; Sir Dr Woo Po-shing, 1995 Honorary Doctor of Laws; Mrs Diana Ying, 1995 MA Public and Social Administration graduate, Co-Chairman of the Alumni Donations Committee and DAO Director; and Mr David Hui, 2001 LLM graduate and Co-Chairman of the Alumni Donations Committee; and Mr Andrew Fan, 1998 BA (Hons) in Business Studies graduate, received a souvenir from Professor Chang. Irene Ng, Dr Ng's daughter, accepted the souvenir on her father's behalf. "This ceremony has made a great impression on me. CityU graduates are proud to be alumni. Although I can only be counted as a member of CityU's extended family, I sincerely hope that CityU will continue to be a leading university in ." 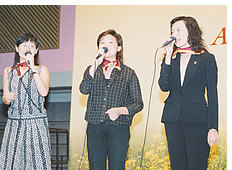