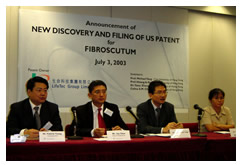 Professor Michael Yang of the Biology and Chemistry Department led a CityU research team to discover an anti-fibrosis and anti-cancer compound called "Fibroscutum" it was announced 3 July. The research project, based on experiments with Wei Jia, an existing Class 1 drug in China, was commissioned by LifeTec Group Limited (LifeTec).

The research team, in conjunction with Professor Hiang-Fu Kung of the University of Hong Kong, proved that Fibroscutum suppresses fibrosis and tumor cell growth of the liver, promising the development of a new class of drug candidates for cirrhosis and liver cancer. "I would like to congratulate and pay tribute to the outstanding research efforts of Professor Yang and his CityU team" said Mr Jay Chun Chairman of LifeTec, a corporation dedicated to the application of bio-technology, "The filing of a US patent for Fibroscutum will form the foundation for future collaboration with international biopharmaceutical enterprises in the development and clinical trials of Fibroscutum in overseas countries. The findings will open up a new horizon for LifeTec in the areas of cirrhosis and cancer treatment that will certainly benefit patients in the future." Further studies of the substance will be undertaken. Subsequently, applications for a provisional patent for its production process, in addition to Fibroscutum's anti-cancer and anti-fibrosis functions, will be filed in the China and other parts of the world. LifeTec has laboratory facilities in Shanghai and Weihai.

In March this year, the government's Innovation and Technology Fund (ITF) awarded LifeTec a grant of HK$1.7 million to do another joint research project led by CityU and co-investigated by HKU, on development of a recombinant DNA version of Wei Jia (LifeTec's hepatitus drug launched commercially in 2001 and welcomed by over 500 hospitals due to its success in stimulating liver cell growth and repair, with few side-effects). This research is scheduled to reach completion in July 2004.