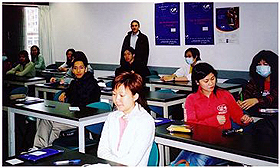 Some 17 students studying French courses in the French Section of City University's Division of Language Studies are the first students in Hong Kong to pass the Test de Connaissance du Francais (TCF) of the French Education Ministry, held on March 29, 2003.

CityU's French Section is the first university teaching unit in Hong Kong to become an officially approved administrator of the TCF. This time around the TCF was open to CityU students only but the French Section plans to open the next TCF to anyone in Hong Kong who wishes to obtain a simple, effective and precise evaluation of their French language skills, whether for professional or personal use.

The TCF is recognised by French universities as well as by university-level language centres and other French-language teaching centres in France and around the world. The special feature of the Test is that it is valid for two years only, and must be retaken to maintain its validity, thus guaranteeing its value.

"Their good results in the test reflect our students' excellent performance and motivation-we're proud of them," said Mr David Santandreu, Coordinator of the French Section. The TCF has six levels, which correspond to the Council of Europe's six-level proficiency scale. Of the 17 students who passed the TCF, nine obtained level two (upper elementary), six obtained level three (intermediate), and one each obtained levels four (upper intermediate) and five (advanced).