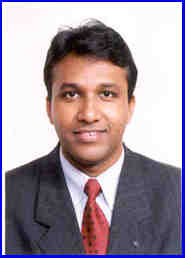 Mr C Raj Kumar, Deputy Director of City University's WTO Law and Dispute Resolution Centre and lecturer in the School of Law, has been awarded a research grant by Japan's Sumitomo Foundation. Mr Kumar's grant was in the category of Fiscal 2002 Grant for Japan-Related Research Projects. The title of his research topic is: "Corruption and Human Rights-Promoting Transparency in Governance in Hong Kong, Japan and India".

The Sumitomo Foundation, which aims to contribute to the betterment of human society, received 217 applications for the fiscal 2002 programme from 11 Asian countries/areas; approximately 45 projects were approved. The grants are given to projects in a variety of fields or disciplines that aspire to determine or help solve those problems which confront humanity. The programme aims to enhance mutual understanding between Asian countries and Japan through promoting research projects in the field of social sciences or humanities that are related to Japan.

Mr Kumar said his research project is significant because it will be conducted on the basis of a comparative study over a period of one year that will examine the laws, rules, regulations, institutions and other mechanisms in Hong Kong, Japan and India that prevent corruption and, at the same time, promote transparency and accountability in government. "As a developed country, the problem of corruption is quite different in Japan as opposed to India, where corruption significantly affects the very sustenance of growth and development policies," Mr Kumar said.

In Japan, political corruption and lack of governmental credibility have resulted in economic stagnation and public frustration, in addition to damaging economic performance. "India, a developing country, has its own problems regarding corruption," Mr Kumar said. "Corruption affects India at all levels of governmental decision-making and in the distribution of the state's largesse."

Of the 102 countries included in the Corruption Perception Index 2002, prepared by Transparency International in Berlin, India ranks 71, mainland China ranks 59, Japan ranks 20, and Hong Kong ranks 14. Hong Kong's Independent Commission Against Corruption is perceived world-wide to be an effective model of institutional framework to combat corruption, Mr Kumar said. He will use the Hong Kong experience to examine the possible implementation of its strategies in Japan and India.

The research project will focus on the comparative experiences of promoting transparency in governance policies from a human rights perspective, so as to argue for the development of a human right to good governance, Mr Kumar explained. "The human right to good governance would encompass rights relating to the promotion of transparency and accountability at all levels of decision-making in government, as well as the private sector, in Japan, Hong Kong and India."