City University of Hong Kong researchers who compile the Hong Kong Consumer Satisfaction Index (HKCSI) reported the overall satisfaction level of local consumers dropped to a record low last year. They also identified a correlation between unemployment and the satisfaction index-the higher the unemployment, the lower the index. The HKCSI 2002 was released on 11 February. 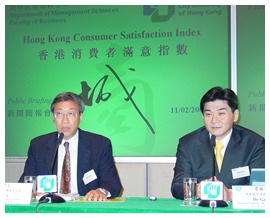 The HKCSI is a performance indicator developed by CityU's Department of Management Sciences (MS) to measure local consumer satisfaction with six major categories of goods and services, covering as many as 69 items. The index for the year 2002-65.1, a drop of 1.5% from the previous year's figure of 66.1-was the lowest gauge since the annual finding was first announced in 1998. The highest index registered was 67.5 for the year 2000. 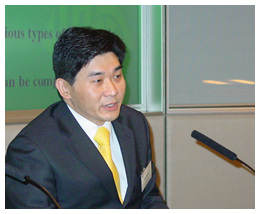 "In tough times, it is understandable that people have a tighter budget," said Dr Geoffrey Tso, Associate Professor of the Department of Management Sciences, who oversaw the HKSCI 2002 survey. "People are simply reluctant to spend and when they do spend, they expect high value in return."

In the six categories of good and services, local consumers were least satisfied with housing and related items. They were most satisfied with the categories of transportation, followed by clothing and personal care, information and entertainment, food and drink, and non-CPI items. Dr Tso attributed the low level of consumer satisfaction with housing mainly to its high cost.

Among the 69 individual items, shopping in Shenzhen, housing rent (private house), television service subscription, job-seeking websites and job-seeking magazines, were among the lowest ranked. Highest on the gauge were film, music CDs, and rice. "Retail prices in Hong Kong have been dropping, which makes shopping in Shenzhen less attractive," remarked Dr Tso. "Our findings over the years also reveal that consumer satisfaction levels tend to be steady as regards physical commodities, and rather erratic as regards services."