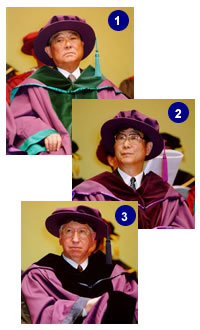 At the Congregation's fourth session on 13 November, the University conferred honorary degrees on three prominent and distinguished people.

Dr William Mong Man-wai (1), Chairman and Senior Managing Director of the Shun Hing Group and dedicated community leader, was conferred with the honorary degree of Doctor of Social Science. Professor Qu Geping (2), a seminal figure in the development of 's environmental protection policies, a member of the Ninth National People's Congress (NPC) Standing Committee and Chairman of the Ninth NPC Environmental Protection and Resources Conservation Committee, was conferred with the honorary degree of Doctor of Science. Dr Myles Brand (3), a dedicated proponent of graduate and professional education, President of Indiana University and former Chair of the Big Ten Council of Presidents/Chancellors, was conferred Honorary Doctor of Social Science.

Speaking on behalf of his fellow honorary award recipients, Dr Brand said they were deeply honoured by the distinction bestowed on them. The ability to anticipate and manage change was the theme of his address. During the last half-century, most of the world's nations have experienced greater change in a shorter period of time than in any other era in history and the future holds accelerated change, he said. There are some unchanging principles, including humanistic values, treating people with respect, a pursuit of intellectual values and a concern for the common good, which create a bridge that connects the past to the future. In order to thrive today and in the future, we must hold fast to these principles and recognize that we are all citizens of the world and participants in global communities of learning. In conclusion, Dr Brand wished the graduates the opportunity to use their talents to make a difference, to improve the world for their children and their children's children.