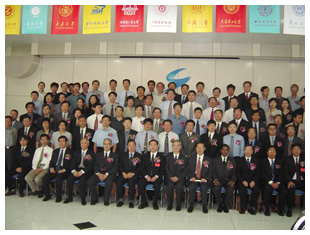 CityU's endeavours to tap into the scientific and technological potential of the Pearl River Delta are based on a two-pronged approach. In May this year, the University opened its Zhuhai Applied Research Centres, making it the first local tertiary institution to set up a research base in Guangdong's Southern Software Park, on the western side of the river estuary. Not to be outdone by Zhuhai, exciting developments on the eastern front are gathering speed at the Shenzhen Virtual University Park (SVUP), less than two years after CityU signed on as a member.

"We are ready to go into full-throttle mode in Shenzhen," said Professor Y S Wong, Vice-President (Institutional Advancement), who returned from the fourth annual meeting of SVUP members on 14 October. He said most of CityU's research centre laboratories are fully equipped, with some 30 support and administrative staff, mainly local help, already in post. Another 20 will be added to the payroll in the coming months through open recruitment and referrals from local employment agencies. The SVUP, established three years ago and located in the Shenzhen High-Technology Park, is a consortium of 42 member universities from the Chinese mainland and overseas (including five from Hong Kong). In the past two years, Professor P S Chung and Professor W F Fong, respectively Vice-President and Associate Vice-President (Research), have played an instrumental role in establishing CityU's presence in Shenzhen and in ensuring its smooth operation. 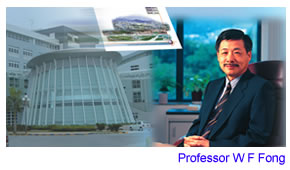 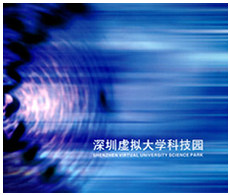 With a direct investment of $16 million ($10 million in equipment) made so far, representing less than 1% of CityU's yearly expenditure, the University has set up two applied R&D centres in the SVUP: one on biotechnology and health; and another on industrial technologies, overseeing a total of 10 projects now in various stages of development (see table). "Most of the equipment imported from Hong Kong has been installed," said Professor Fong, who helps monitor the day-to-operation of the centres at the SVUP. "The quality of fitting out is as good as that in any first-rate laboratory you can find in Hong Kong."

In addition to these centres, CityU also used the Shenzhen foothold as a launching pad for commercial incubation and technology transfer on the Chinese mainland. With the help of the Industrial and Business Development Office (IBDO), three associated companies of CityU Enterprises Ltd have opened their doors for business: TeleEye Digital Technology (Shenzhen) Co Ltd, IRIS Systems (Shenzhen) Limited, Decipher Bioscience (Shenzhen) Limited. A fourth one--Giga & Mega Technology Ltd-will soon hang out its shingle. So far, an RMB 8 million yuan technology licensing agreement on organic liquid display has been signed between the University and a local manufacturer.

Centres to develop applied R&D projects
While commercialization and technology transfer is a long-term goal, the centres are expected, over the medium haul, "to develop the applied R&D projects to their fullest potential", said Mr H Y Wong, IBDO Director, whose office provides the company secretarial services for these new start-ups. The centres are also expected to generate "steady streams of income" from organizing consultancy and training projects for the science and industry community in Shenzhen and neighbouring areas. 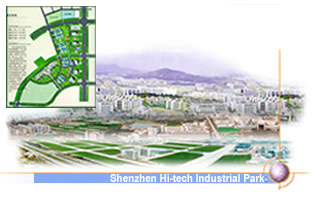 These projects were chosen from some 20 proposals submitted by academic departments two years ago. Due to a lack of space in the present SVUP environment, the University will only accept new projects that show exceptionally good promise. The SVUP management authorities are planning a university science park by adding another 15 to 20 hectares of land to accommodate some 10 new buildings to meet the fast-growing need. According to Mr Wong, CityU considers the Shenzhen University Science Park project bold and forward-looking and has informally expressed a preliminary interest in having our own building two to three years down the road. It will be, at this idea stage, a multi-purpose structure primarily geared towards applied R&D work but some provisions for training and educational uses, such as lecture rooms and conference rooms for seminars and conferences as well as facilities for enhancing students' learning, will also be considered.

Although CityU is a "latecomer" to the SVUP--the 38th signatory to the SVUP consortium and the fifth institution from Hong Kong to join-it has made big strides. In its annual meeting in mid-October, the SVUP's management body awarded CityU and other members each a special RMB50,000 prize, which Professor Wong said is not a small amount by Chinese mainland standards, for their active and significant contribution to the science park.