Five local economists presented their views on the government's budget for 2002-2003 at a special economic forum hosted by CityU's APEC Study Centre on 7 March.

An audience of 40 attended the forum, which consisted of the following speakers: Mr Tang Kwong-yiu, Government Economist of the Hong Kong Government, Professor Sung Yun-wing, Head of the Department of Economic, Chinese University of Hong Kong, Mr George Leung Siu-kay, Chief Economist of HSBC Greater China and Chairman of the Hong Kong Chamber of Commerce's Economic Policy Committee, and Dr David Y K Wong, Director of Overseas Investment Limited and Honorary Treasurer of Business and Professional Federations of Hong Kong. The forum was moderated by Dr Li Kui-wai, Coordinator of the APEC Study Centre and Associate Professor of CityU's Department of Economics and Finance. 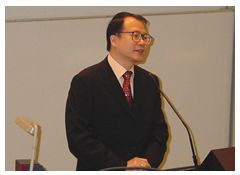 "The way I look at it, the budget is mildly expansionary," said Dr Li in his opening remarks. "There aren't many changes, except for the pay cut for civil servants."

Dr Li said the government "rightly chose" the road to macroeconomic recovery and fiscal balance. "It's appropriate that the government will be leaving the economy to heal on its own, and keep its hands off the redistribution process."

The forum spent more than 90 minutes discussing the pros and cons of the 2002-2003 budget.

The government is forecasting a HK$45.4 billion deficit this year, with economic growth of 1 per cent. In the 6 March budget address, the government pledged $6.4 billion in economic relief measures.

It was also announced that civil servants would face a 4.75 per cent pay cut, while wine duty would increase to 80 per cent from 60 per cent.