Seminar: WTO and after

One of the mainland's top State Council researchers told a CityU seminar on 1 February that 's World Trade Organization (WTO) membership will breed new economic opportunities as well as a number of stresses for the country. 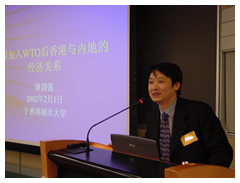 At the one-day seminar, China's WTO Membership: Impacts on Economic Relations Between Hong Kong and the Mainland -- organized by the Centre for Comparative Public Management and Social Policy -- Professor Long Guoqiang, Deputy Director General of the Department of Foreign Economic Relation Studies of the State Council's Development Research Centre, discussed the fundamental changes that will come with the mainland's entry to WTO, as well as the challenges it will pose to Hong Kong.

's WTO membership, he predicted, will bring economic growth, development in trade and increases foreign investments. "Economic growth, however, will not be equally distributed in all sectors and regions. The sectors, which have an edge, may enjoy greater growth and profit whereas those which are less competitive, such as agriculture, or those used to be well-protected may be hard hit," said Professor Long. "How to address these problems will become a critical issue for the government."

At the seminar, Professor Long also discussed the establishment of a free trade zone. As there is no precedence for such a zone between a developing economic entity and a free trade port, the free trade zone will be a special and innovative one, he said. 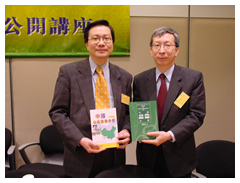 In conjunction with the seminar, City University of Hong Kong Press launched Analysis of Public Policies of China 2002. The book, written by local and mainland researchers and edited by the Centre for Comparative Public Management and Social Policy and the Centre of Public Policy Study of Chinese Academy of Social Sciences, details China's major public policies and how they were formulated.

The book contains an introduction and 12 chapters on topics related to public finance management, changes in the government's function in economic management, macro-economic policy, and human and natural resources policies. "The book is of great reference value in , overseas and even the mainland," said Professor Anthony Cheung Bing-leung, Associate Director of the Centre for Comparative Public Management and Social Policy. Since last year, has been actively promoting the analysis of public policies. "Such kinds of analytical studies will be of great value be it in the academic or practicing fields," said Professor Cheung.

Last year, the Centre for Comparative Public Management and Social Policy and the Centre of Public Policy Study of Chinese Academy of Social Sciences joined hands in publishing the Analysis of Public Policies of China 2001. Both books can be purchased at fine bookstores and by contacting City University of Hong Kong Press.

*** This story appears in City University Staff Newsletter, Linkage No.209 ***