The university in transformation 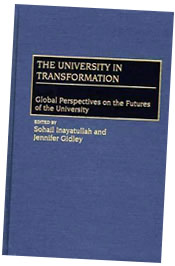 What the future may hold for universities has been a hot topic for discussion these past few years, especially since the Internet began to dominate our lives. Advances in technology have caused many to question the relevance of the traditional role universities have played in our society. The following article written by Lane Jennings and reprinted with permission, from the January/February 2001 issue of The Futurist, reviews a book* that offers some ideas about possible directions university education could take. Perhaps it is time to understand more...

Alternative Visions for the Future University
The old paradigm of universities as self-contained villages is being shattered by new technologies and new societal values, according to the contributors to The University in Transformation.

The conventional wisdom that it takes a small village-the college campus-to produce a college graduate underlies the basic structure of most universities today. This model has changed surprisingly little from that which emerged 1,000 years ago in medieval Europe. Professors lecture, students listen, ask questions, and are tested on how well they remember their professors' words. But a millennium later, times have changed. Like it or not, the thousand-year-old ideal of the campus as a village-paced community for scholarship, discussion, and research is eroding. Competing models are beginning to emerge, incorporating new technologies, new forms of organization, and new social goals.

The University in Transformation, edited by Australian futurists Sohail Inayatullah and Jennifer Gidley, presents some 20 highly varied outlooks on tomorrow's universities by writers representing both Western and non-Western perspectives. Their essays raise a broad range of issues, questioning nearly every key assumption we have about higher education today: For instance, why should higher education cost so much, when information now can be so easily and cheaply shared through the Internet and other computer-based technologies? And why must students register exclusively at one institution to pursue a degree, rather than freely take courses for credit when and whenever they best meet their own particular needs?

The most widely discussed alternative to the traditional campus is the Internet University—voluntary community of scholar/teachers physically scattered throughout a country or around the world but all linked in cyberspace. A computerized university could have many advantages, such as easy scheduling, efficient delivery of lectures to thousands or even millions of students at once, and ready access for students everywhere to the resources of all the world's great libraries.

Yet the Internet University poses dangers, too. For example, a line of franchised courseware, produced by a few superstar teachers, marketed under the brand name of a famous institution, and heavily advertised, might eventually come to dominate the global education market, warns sociology professor Peter Manicas of the University of Hawaii at Manoa. Besides enforcing a rigidly standardized curriculum, such a "College education in a box" could undersell the offerings of many traditional brick and mortar institutions, effectively driving them out of business and throwing thousands of career academics out of work, note Australian communications professors David Rooney and Greg Hearn.

On the other hand, while global connectivity seems highly likely to play some significant role in future higher education, that does not mean greater uniformity in course content—or other dangers—ill necessarily follow. Counter-movements are also at work.

Many in academia, including scholars contributing to this volume, are questioning the fundamental mission of university education. What if, for instance, instead of receiving primarily technical training and building their individual careers, university students and professors could focus their learning and research efforts on existing problems in their local communities and the world? Feminist scholar Ivana Milojevic dares to dream what a university might become "if we believed that child-care workers and teachers in early childhood education should be one of the highest (rather than lowest) paid professionals?" Other writers challenge the tradition, long dominant in Western education, that equates useful knowledge exclusively with the products of rational analysis and the so-called "scientific method." Neohumanist educator Marcus Bussey describes a gurukula (place for deep learning) in West Bengal where "Ancient Indian spiritual philosophy [is] brought to bear on political theory, and ...indigenous medical practices [are] taught alongside, and interacting with, Western allopathic medicine."

Co-editor Jennifer Gidley shows how tomorrow's university faculty, instead of giving lectures and conducting independent research, may take on three new roles. Some would act as brokers, assembling customized degree-credit programs for individual students by mixing and matching the best course offerings available from institutions all around the world. A second group, mentors, would function much like today's faculty advisers, but are likely to be working with many more students outside their own academic specialty. This would require them to constantly be learning from their students as well as instructing them, and could develop an elite of multi-faceted, cross-disciplinary "paracademic" faculty members, many of whom would also have work experience outside academia.

A third new role for faculty, and in Gidley's view the most challenging and rewarding of all, would be as meaning-makers: charismatic sages and practitioners leading groups of student/colleagues in collaborative efforts to find spiritual as well as rational and technological solutions to specific real-world problems.

The university as we know it may still continue to exist in some form. Jim Dator, director of the Hawaii Research Center for Futures Studies, sees at least a few elite colleges surviving as "day camps and marriage bazaars for the adult children of the rich and famous," or even as theme parks-a kind of Colonial Williamsburg for intellectual tourists, where costumed reenactors in a period setting might stage famous lectures by Albert Einstein Herbert Marcuse, or Robert Frost.

Oddly missing from the highly varied set of scenarios in The University in Transformation is a consideration of the role of universities in supplying non-job-related educational experiences for the elderly and others with the interest, cash, and leisure to pursue knowledge for self-improvement or simply for entertainment.

Moreover, there seems little reason to suppose that any one form of university must necessarily drive out all other options. Students may be "enrolled" in courses offered at virtual campuses on the Internet, between-or even during-sessions at a real-world problem-focused institution, and/or their participation in an elite vision-focused technical and spiritual training group.

As co-editor Sohail Inayatullah points out in his introduction, no future is inevitable, and the very act of imagining and thinking through alternative possibilities can directly affect how thoughtfully, creatively, and urgently even a dominant technology is adapted and applied. Even in academia, the future belongs to those who care enough to work their visions into practical, sustainable realities.