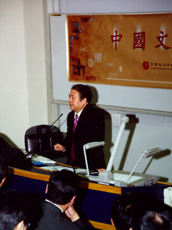 Contemporary Chinese culture was put under the microscope, dissected, and found to be in reasonably good health heading into the next 100 years by Professor Liu Zai-fu, a Visiting Professor at CityU's Department of Chinese, Translation and Linguistics.

In his lecture, Cultural Awakening in 20th Century , at CityU on 20 February, Professor Liu, who is also a Visiting Research Professor at Colorado University, focused his critical eye on the most influential cultural aspects of contemporary Chinese culture. He also analyzed the development of three key ideologies and their impact on Chinese literature over the past century.