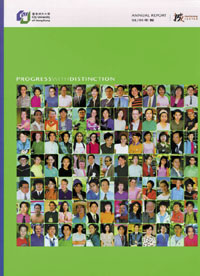 The Report, on the theme of "Progress with Distinction", comprises two books: the Annual Report, which highlights the University's achievements in teaching and learning, research, and outreach activities, and a Financial Report on the University's accounts. This is the first time the University has been honoured for the timeliness, usefulness and integrity of its financial disclosure.

Over the past four years the University has won a total of 12 awards at the New York event, the largest annual report competition in the world. This year the contest has attracted more than 1,000 entries from major American corporations and charitable organizations, including IBM, Ford and General Motors. Participants from Hong Kong include the MTRC, Hang Seng Bank, China Light & Power and the Hong Kong Polytechnic University, among many others. City University tops the local competitors with two gold awards. The award presentation was held on 27 July.