Dare to dream and fly high 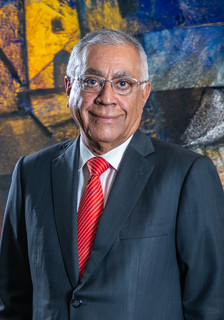 Throughout his long career, Mr Banga has experienced many victories, but has also encountered his fair share of challenges. While experiencing a setback, Mr Banga recalls a traditional Scottish story titled King Bruce and the Spider in helping deal with the situation.

The subject of the story is Robert the Bruce, King of Scotland during the 14th century. He was defeated six times during the Scottish war against England. One day, King Bruce watched a spider trying to climb the walls of the cave that he was sheltering in. The spider slid down many times but kept trying, finally reaching the roof on its seventh attempt. King Bruce was inspired. Learning from this experience, he subsequently led his army into battle once again and won his kingdom back.

“Success is neither instantaneous, nor without risks or setbacks, but we have to forge ahead  towards our goals,” said Mr Banga, who believes that success depends on three pillars: hard work, education and karma. To embark on the path to success, one should possess professional knowledge and innovative thinking to meet the needs of an ever-changing world.

While flying high to attain his dreams, Mr Banga has not forgotten about those who are less fortunate. He set up The Caravel Foundation, together with his wife, Mrs Indra Banga, to give back to the community. The Foundation, a registered charity in Hong Kong, focuses on education and healthcare for underprivileged children primarily in Hong Kong, mainland China and India.

His distinctive entrepreneurial achievements and contributions to the local and global community has won him an array of accolades. In 2011, Mr Banga received the prestigious “Pravasi Bharatiya Samman Award” from the former President of India. In 2018, he was conferred the “NMD Award of Excellence” by the Directorate General of Shipping, India and the National Maritime Day Celebrations Committee; and in 2019, he was recognised as the “Most Influential Business Leader of Asia” by The Economic Times, to name just a few.

A staunch supporter of CityU, Mr Banga is a member of the Court, a member of the Steering Committee of the “United, We Soar” Campaign, Honorary Fellow of CityU, and Honorary Patron of the CityU Foundation. He has often stated that universities play an important role in solving problems facing the world today. Most importantly, he shares CityU’s vision of maximising the transformational impact of education.

Mr Banga is particularly impressed by CityU’s contribution to harnessing technology and bringing culture and art to the people of Hong Kong. “CityU is taking great strides in integrating art and science to preserve cultural heritage and drive innovation,” he said. “I am confident that CityU will chart new heights of success in the near future.”

In 2019, the CityU Exhibition Gallery was named the “Indra and Harry Banga Gallery” in appreciation of the generous support of Mrs Indra and Mr Harry Banga.

Despite starting his journey from humble beginnings, Mr Banga has never stopped dreaming big. He has lived by the immortal words of Theodore Roosevelt: “Keep your eyes on the stars, and your feet on the ground”. He encourages everyone to dream big with a commitment to hard work and to maintain a humble heart in their soul.