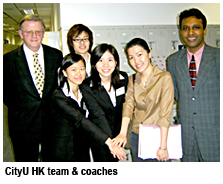 The School of Law has entered a promising team in the second annual Willem C Vis (East) Moot Competition hosted by CityU, 4-10 April. About 180 students from 18 law schools in Asia, America and Europe, their coaches and professional arbitrators are meeting for the oral arguments. Last year's launch of the Hong Kong version of the original Vis Moot, held annually in Vienna, is another example of the University's committment to the internationalization of our campus and opening doors to collaboration with respected tertiary institutions beyond Hong Kong's borders. 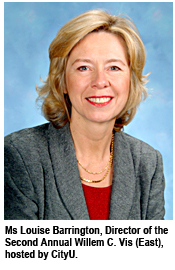 "The Moot offers law students in the region a unique educational experience," Ms Louise Barrington, (East) Moot Director and SLW faculty member said. The goal of the Vis (East) Moot is to share with the original Vis Moot the promotion and study of international commercial arbitration, and to train tomorrow's legal leaders in methods of alternate dispute resolution. Each year, the problem involves consideration of the United Nations Commission on International Trade Law (UNCITRAL) Convention on Contracts for the International Sale of Goods (CISG) and other uniform commercial law, in the context of an arbitration. This year, the new Swiss Rules are used.

"If the first (East) held here in 2004 is any indication," Ms Barrington added, "this year's teams are talented, enthusiastic and well-prepared. With the longer period for General Rounds, we hope there also will be more time for getting acquainted with CityU, making friends with students from around the world and for sightseeing in ." 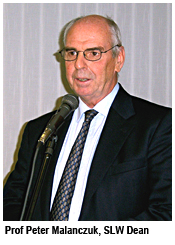 The Opening Ceremony, held at the Hong Kong International Arbitration Centre in Central, was attended by special guests Mr Eric Bergsten, Director of the Willem C Vis Moot in Vienna; Professor Peter Malanczuk, SLW Dean; Mr Glenn Haley, Chairman of the Chartered Institute of Arbitrators (East Asia Branch); Mr Philip Yang, Chairman, Hong Kong International Arbitration Centre; Mr Gary Seib of law firm Baker & McKenzie; and some 50 team members from law schools across the globe. According to Mr Bergsten, "The world of international commercial law is a fascinating one, in part because of its substance, but also because it is a world of people and not just of law or business. This is a wonderful time and place to enter that world."

Since its inception in Vienna in 1993, the Vis has grown from eleven teams representing 9 countries to over 150 teams today.  Every year the numbers increase, as more law students discover the benefits of what has become one of the premiere international student competitions in the world.

To accommodate the growing numbers wishing participate, last year saw the launch in Hong Kong of a second event, a "sister" to the Vienna Vis, with 14 teams from 8 jurisdictions. Using the same problem as the Vienna competition, and with substantially identical rules, the Vis (East) gives law students the opportunity to travel to Hong Kong to compete, on a date just before or after the Vienna orals.

The Chartered Institute of Arbitrators (East Asia Branch) is the principal underwriter of the Vis (East) Moot, which is not a regional elimination prior to the Vienna orals, but a separate competition. Any law school may enter teams in either the Vienna competition or the Hong Kong competition, or both. There will be a winning Vis team in Vienna, as always, plus a winning Vis (East) team in Hong Kong.

Following the Competition, an Awards Banquet will be held on 10 April at the American Club of Hong Kong.

Supporting organisations include: the Hong Kong International Arbitration Centre, established in 1985 to assist disputing parties to solve their disputes; UNCITRAL; the Court of Arbitration of the International Chamber of Commerce; Lawasia, a professional association of representatives of bar councils, law associations, individual lawyers, law firms and corporations principally from the Asia Pacific region; and .

The Moot Competition was named after Willem Vis (born in 1924), a world-renowned expert in international commercial transactions and dispute settlement procedures. He was born in Utrecht in the Netherlands and read law, economics and philosophy at Leyden, Nijmegen, Strasbourg and Magdelen College, Oxford. Later, he helped craft the UNCITRAL Arbitration Rules and served on the faculty of Pace University School of Law from 1980 until his death in 1993.