Court" conference,  8-10 October, as one of the University's  20th anniversary celebration events.

Co-sponsored by the Court Cultures Research Symposium at UCLA , the conference is part of an on-going international collaborative research project on courts of the ancient and medieval world, such as  those of ancient Byzantium, the Carolingian court of eighth-century France, the imperial Japanese court of the later 1500s, the Chinese Courts of the Han, and Song dynasties, and so on. 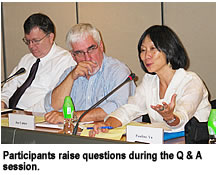 In addition to CityU's Professor  Zhang Longxi, CCS Director, as a Commentator, some 15 scholars from several prestigious universities, including Steven Carter of ; Massio Ciavolella, Patrick Geary, Claudia Rapp and Scott Waugh of UCLA; David Knechtges and Gene Vance of the ; Steve West of , Paul Dutton of Simon Fraser University (Canada); and Arjo Vanderjagt of the University of , were invited to speak at the conference. The use of books and court libraries, book printing sponsored by courts, and encyclopedias compiled by court decree, were among the subjects of discussion.

The Court Cultures Research Symposium plans to hold future conferences on understanding courts and societies beyond the usual disciplinary and cultural boundaries. Some of the themes in preparation are: “Spectacle: pageantry, ritual, games, dress, executions, hunting”; “Taste and sensibility: manners, connoisseurship, aesthetic values, fashion, collecting”; and “Constructions of gender and identity: women, femininity and masculinity, eunuchs, monks, and chivalric codes”. The field offers fertile ground for continuing research into and comparison of the intelligentsia and body of knowledge associated with pre-modern Asian and European Courts.