CityU’s Industrial Attachment Scheme (IAS) celebrated another successful year in a ceremony held at the City Top resaturant on campus, 23 September. One of the highlights was the presentation of a HK$930,000 cheque to the IAS from the Drs Richard Charles and Esther Yewpick Lee Charitable Foundation. 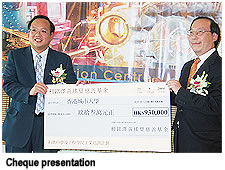 Inaugurating the closing ceremony, Professor C H Chan, Dean of CityU’s Faculty of Science and Engineering (FSE), thanked participating industrial partners, students and CityU staff for their support. He commended the improvement IAS students have shown in interpersonal skills, hands-on knowledge and in Putonghua. “If you want to succeed, never ask how much you will gain, but ask how much you can contribute,” he encouraged the students.

Presenting the cheque to Professor Chan, Mr P T Chan, Committee Member of the Drs Richard Charles and Esther Yewpick Lee Charitable Foundation, said, “Indeed, the students’ growth and outstanding performance are strong evidence that our donation has been used wisely.” He further acknowledged that IAS students are “quality individuals who possess problem-solving skills, independent thinking and a desire to learn”.

Practical and emotional support from teachers

Mr Frankie Leung, a final-year student in the Department of Electronic Engineering (EE), spoke on behalf of IAS students at the ceremony. He said that participating in the Scheme helped him established a clearer career goal. He thanked his teachers for their whole-hearted support. “During our placement, our teachers visited us regularly,” Frankie said. “These visits meant a lot to us—practical advice, and also emotional and spiritual support.”

Two other final-year EE students, Mr Ho Ka-wing and Mr Wong Man-fai, received awards from Mr Patrick Lo, Senior Construction Manager of Shui On Building Contractors Limited, at the closing ceremony. The two students were involved in a project, entitled, “Works Order Management System” during their placement at Shui On. Responsible for database design, setup and maintenance, both said that they could apply what they learned at CityU to resolve problems they encountered in the workplace. Their presentation skills as well as problem-solving skills greatly improved during the 9-week attachment.

Participating employers and students spoke of the IAS as a win-win story in an experience-sharing session held prior to the ceremony.

Mr Measure Hung, Chairman and Managing Director of Mobicon roup Ltd, who joined the scheme in 2002, remarked that the performance of IAS students has been highly satisfactory. “Considering the market for electronic industry , sales people who have an engineering background are much sought after, I think CityU students are well adapted to the niche,” he said. He has

employed 10 CityU graduates in his company. One of them is Mr Cypri Yu, a former IAS and co-op scheme student who impressed Mr Hung as highly skilled in interpersonal communication. Now Cypri is the Sales Engineer of A Power Ltd, under the Mobicon Group. On-the-job training offered Cypri bountiful opportunities to grow as a sales professional in theelectronic industry, selling components and network security systems. He said that he has overcome his initial frustration with being rejected by prospective clients and has discovered his key to success in sales. “The truth in sales is not about selling, but in providing solutions to customers’ problems,” he said. “When people realize that you can help them, they look for your service.”

Mr Hung was equally impressed by the performance of CityU interns majoring in arts and humanities disciplines. Ms Doris Tsang, from the Department of English and Communication, has added value to the company’s newsletters and promotional materials with her interviews and feature stories. “The stories have given a touch of freshness and creativity to the newsletters,” Mr Hung said. He was also highly satisfied with the efficiency of her work. “Delivered within 10 days,” he said, holding a newsletter in his hand. As for Doris, the IAS experience has given her a welcome opportunity to grow into a PR professional. She also cherished the caring culture she experienced at Mobicon.