“When am I Chinese and when am I Canadian?” asked China-born Canadian scholar Wei Qi Elaine Perunovic. An identity crisis seemed to be brewing at the 16 - 17 August Bicultural Self Symposium co-organized by the Department of Applied Social Studies (SS) and the Department of Psychology of  the University of Illinois at Urbana-Champaign, US, where a dozen scholars from Canada, Hong Kong, mainland China, Taiwan and the US congregated to report and discuss their research on the phenomenon of the ‘bicultural self’. A noticeable portion of the audience consisted of research students from CityU, Hong Kong University and the Chinese University of Hong Kong. 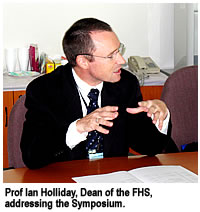 Monoculturalism is dead. The Symposium, held at CityU, explored the theoretical and practical significance of the ‘bicultural self” construct as created by constant exposure to different cultural influences against the backdrop of rapid globalization. Hong Kong, long a confluence of Western and Chinese cultures, offers a prime example of (at least) two sets of world views coexisting in a unique context and is a place where bicultural individuals, educated biculturally and living bicultural lifestyles, have evolved.

“This two-day Symposium will not be just a sharing of views on bicultural issues and studies. More importantly, we hope this event will bring new insights and perspectives to the significance of such studies for the many developing cities of ,” said Professor Ian Holliday, Dean of the Faculty of Humanities and Social Sciences. “This Symposium will serve as a starting point for the emergence of the construct.” 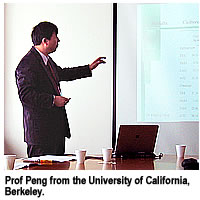 Specializing in Psychology, and a member of the Faculty of East Asian Studies at University of California, Berkeley, Associate Professor Peng Kaiping offered the audience various interesting analyses of the series of empirical studies he has conducted on bicultural phenomena. The main thrust of his research is to question how ‘naive dialecticism’ found among East Asians influences Asian cognition. “We found that East Asian subjects exhibited greater ‘ambivalence’ in their self-attitudes than US subjects, on a traditional self-report measure of self-esteem. I’m not an expert on theories but practices. Solid figures in my research results lead me to new, surprising insights,” Professor Peng explained. Fresh perspectives also lead to more questions of ‘How?’ and ‘Why?’ which clearly could not yet be answered to the full satisfaction of many of the Symposium’s participants. 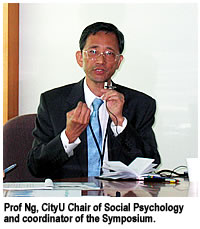 With considerable experience in cultural research as well as a strong theoretical background, Professor Ng Sik-hung, Head of CityU's SS, showed several portraits of well-known national heroes, including Deng Xiao-ping and Olympic Games medalist Yaoming, to illustrate his paper’s examination of problems arising from the use of “bicultural priming for investigating the inclusiveness of self and cultural orientations.” Professor Ng’s presentation provided basic-to-advanced theoretical knowledge followed by in-depth analyses, nonetheless meaningful for people with academic backgrounds in social, cognitive and neuropsychology. He has been working on the subject in collaboration with SS Associate Professor Dr Julian Lai and MPhil student Mr Norman Yam, and Professor Ying Zhu of Peking University’s Department of Psychology. 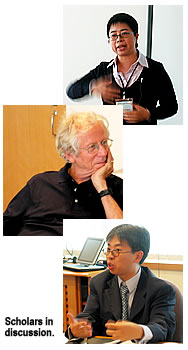 Elaine Perunovic, in collaboration with Dr Michael Ross, Anne Wilson and Catherine Rawn of the University of Waterloo, Canada, focused on bicultural individuals of Chinese heritage who moved to . The question of 'when' one is 'Canadian' and 'when' one is 'Chinese' is of interest to a vast number of Canadians, who take pride in their ‘cultural mosaic’, and Hong Kong residents, many of whom have lived in or have relatives or friends living in Canada.

Ms Perunovic’s findings suggested that “the two cultural identities in bicultural individuals are likely stored in separate knowledge structures, and its associated language may activate each identity.” However, the results of further field studies suggested “a more complicated relation between cultural cues and biculturals’ self identities.” Not the best of  news for those of us with confusing and sometimes conflicting cultural influences, hoping to understand, once and for all, who we are and how we got this way. 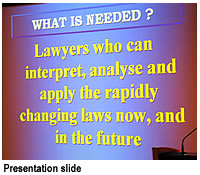 Dr Hong Ying-Yi, Associate Professor in the Department of Psychology, University of Illinois at Urbana-Champaign, the final speaker at the two-day Symposium, revealed that by using both qualitative and quantitative methodologies, her research indicated two processes at work in how bicultural individuals represent the two cultures to which they have been extensively exposed: “one related to cultural knowledge, and the other related to social identity affirmation.” Research is still underway and topics for future studies are mounting.

While the Bicultural Self Symposium certainly succeeded in shedding some light on the bicultural mind, the global population of multicultural individuals asking ‘Who am I?’ continues to multiply.

Shiona Mackenzie contributed to this article.