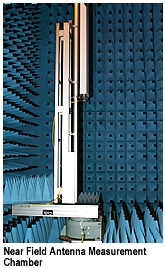 Kicking off the opening ceremony were Mr Li Gang, Deputy Director of the Liaison Office of the Central People’s Government, HKSAR, Mr Samson Tam, President of the Hong Kong Association for Innovative Science and Technology, Mr Stephen Mak, Deputy Director of Information Technology Services Department, HKSAR, and CityU President Professor H K Chang and Deputy President Professor David Tong. In his welcoming remarks, RCW Director Chair Professor (Electronic Engineering) Edward Yung said that the Chamber, designed from scratch by CityU professors with the state-of-the-art equipment and computer softwares from the US, Belgium and Israel, will do good for antenna design in the Pearl River Delta Region. 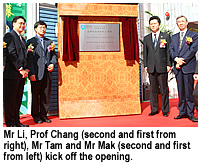 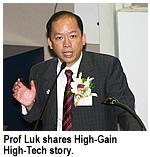 venture with the state-owned Shandong Hi-Tech Investment Corporation making base station antennas for 3G network. Some of the impressive achievements in its short history of two years include winning the High Technology Enterprise award on the mainland, and being included in the suppliers list of China Unicom. Dr Xue Quan, Associate Professor of the Department of Electronic Engineering, shared his experience of another spin-off, Shenzhen Goldradio Communication Co Ltd, a RMB 2.5 million yuan start-up which already made profit in its first year of operation in 2003.   The company manufactures satellite communication components using ’s Beidou Global Positioning System, as well as innovative products such as cellular phone jammers, useful for occasions such as concerts, ballots, classes and hospital wards, where mobile communications are not welcome. 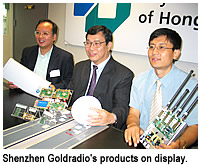 Established in 1994, the RCW has put together a strong team of 15 professors in the various fields of applied electromagnetics, antennas, radio frequency / microwave/ millimeter-wave circuitry, mobile communications, and failure analysis. The Centre also has a track record of nurturing outstanding students that have made their mark with prizes and championships in numerous open competitions, such as IEEE ( the and Electronics Engineers, Inc.) paper contests. Over the years, the Centre has attracted large blocks of funds and grants from internal and external sources; 46 research projects worth over HK$42 million are under way.