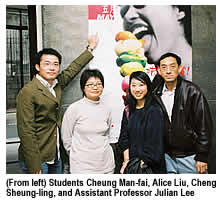 Four final-year students of the School of Creative Media (SCM) produced a three-minute trailer for “Le French May” this year. With appreciation from the Consulate General of France in Hong Kong, Mr Julian Lee, SCM Assistant Professor and the project supervisor, takes pride in the expert output. He confidently assures people in the creative media industry that CityU students are capable of producing innovative and professional work.

Thanks to the screening of Night Corridor, (an independent film produced by Mr Lee), at the Lyon Film Festival last November, he was able to connect his students with the “Le French May” trailer project. He described it as a success because it brought a win-win situation to both parties. “On the one hand students gain professional experience, while, on the other hand, the Consulate receives an excellent trailer,” Mr Lee said. 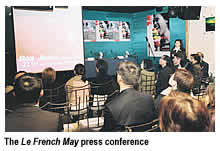 The students certainly seem to have enjoyed the experience. Though all the footage was provided by the Consulate, students felt the three-month process was challenging. “We spent long hours working on the dramaturge of the trailer clip. I now realize editing is not an easy task,” said Cheng Sheung-ling, one the four students on the project. Without close supervision, the student crew felt they had learned a lot more from the project. “I’ve understood the importance of time management, and my conflict management skills are pretty good now,” said Cheung Man-fai, another member of the crew on the project. Alice Liu, student editor of the trailer, believes the video-editing skills and mass communication skills acquired at the SCM helped her work comfortably and confidently. 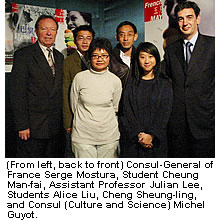 Loic Wong, Audio and Visual Officer of Consulate General of France in , expressed a great satisfaction at the trailer. “I love it! This is the best trailer we have had for ‘Le French May,’” he said. He has shown keen interest in working with CityU students again next year. The trailer is now being broadcasted on the plasma TV display at the World Wide House and in MTR stations, on Airport Express trains, on buses and at URBTIX outlets until the end of May.