Two days of contention and solid deliberation by an international panel of judges ended on a high note as four victors emerged from the fray. Altogether, 37 parties from among internationally renowned designers and postgraduate design institutions had been invited to participate in the Shaw Prize International Design Competition, and entries rushed in from around the globe, including Britain, Germany, Japan, and the United States.

In order to guarantee a fair process, neither the names of the entrants, nor the places of origin, had been revealed to the international judging panel. Three large monetary awards were to be won: First Prize-US$20,000; Second Prize-US$15,000; Third Prize-US$10,000. On 3 November, the winners were announced at the Shangri-La Hotel, Tsim Sha Tsui: First, Grace Cheung and Royce Hong with "The Looking Glass of Human Endeavour"; Second, William Ho with "Better tomorrow, Brighter Future"; Third, Eddy Yu and Hung Lam with "New Frontiers of Human Civilization". The fourth winner, Wang Xu, received a Special Recognition Prize of US$5,000 for conceptual boldness and originality.

Selected from 30 candidates, all the winners happen to be of Chinese descent. "This tells me that modern Asian aesthetics really have arrived," Competition Project Leader Ms Nancy Tong, Assistant Professor at CityU's School of Creative Media (SCM), commented.

Ms Tong was thanked for her idea and the concerted efforts of her colleagues. "I knew the Shaw brothers' people through another project, and they called me to get a few names of well known designers to design the trophy," she explained, "I suggested they should consider an international design competition, to invite not only top designers in the world, but also educational institutions. They liked the idea. Along with other SCM lecturers as the Competition's managing team, I gave the Shaw brothers a proposal, and that's how it all started."

A symbol of humankind's enterprising spirit

In November 2002, the Shaw Prize Foundation Limited, under the auspices of Mr Run Run Shaw, announced it had established three annual prizes, to be conferred from 2004 onwards: The Prize in Astronomy, The Prize in Life Science and Medicine, and The Prize in Mathematical Sciences. Each prize carries a monetary award of US$1 million. The Chairman of the Board of Adjudicators is the first Chinese Nobel Prize winner Yang Chen Ning.

The aim of the Shaw Prize Design Competition was to procure a suitable medal or trophy to represent the pioneering spirit which the Shaw Prize celebrates. The project began in May this year. Five weeks were devoted to research; five weeks were spent inviting jurors and contacting designers, firms and institutions to join the competition. The contestants were given 10 weeks to develop and submit their designs. "It made sense for Hong Kong to be the nerve center, because this city has a special ability to embrace both eastern and western cultural influences," Ms Tong observed. The designers' challenge was to create a three-dimensional design of the award itself and a two-dimensional design of the logo, certificate and stationery to go with the Prize; any words on these items to appear in both English and Chinese. 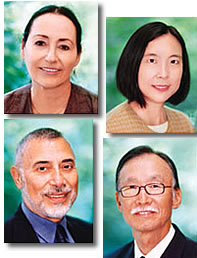 The judges, two artists/educators Sheila Levrant de Bretteville (Director of Studies of Graphic Design at Yale University's School of Art) and Grace Kao (Academic Leader for the Foundation Program, Hong Kong Institute of Vocational Education, Shatin), one award-winning designer Henry Steiner, and the famous Taiwanese sculptor Ju Ming, selected the three finalists, plus a fourth entrant, who was awarded a Special Recognition Prize. Grace Kao remarked, "The panel of judges enjoyed lengthy discussions identifying the merits of each piece. Certain projects elicited animated debate among the jurors, but did not make it to the final round. These projects engaged interesting and contextual concepts that were not realized in simple forms. Most highly praised were refreshing and simple works with thoughtful responses to the idea, meaning, material and form."

After the prize-giving ceremony, the winners gathered around their works for photos and interviews. "We are ecstatic," remarked Ms Cheung, who, with her partner, came in First. "In fact," Mr Hong added, "This is our first project together, and we just got married in May. We feel extremely fortunate." "I was extremely gratified that the panel of judges created an additional category of prize to acknowledge my work," Wang Xu, winner of the Special Recognition Prize said. "It's really encouraging to have been able to do this well in such a short amount of time."

The Competition was organized by the SCM and CityU Professional Services Limited. CityU is honoured to have been involved in the genesis of the Shaw Prize, referred to by some as the "Nobel Prize of the East."