of 's School of Law (SLW) played host to the second WTO ambassador to visit the School this year when
,
Permanent Representative to the WTO, called on the School on 12 February. "It's a good experience to visit where I can look at how people have adjusted to the new situation in and from an economic perspective," said Ambassador Ali, who currently chairs the WTO's Committee on Trade and Development. 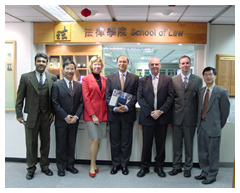 Following a discussion on trade and development in the context of the WTO, Professor Malanczuk introduced Ambassador Ali to the mission and objectives of the WTODR Centre, which was established in January 2002. It is the first university based centre in the region dedicated to the study of the interaction amongst globalization, legal development and international dispute resolution mechanisms.Though the Centre is still in the developmental stage, Professor Malanczuk said one of its aims is to establish itself as a globally recognized centre of excellence in the region. He said that visits by ambassadors to the WTO will benefit Centre by giving it direct access to information and contacts that will facilitate its research and training programmes in highly relevant areas.

Ambassador Ali visited Hong Kong from 9 to 15 February to learn more about the city's political, economic, trade and social development. He has represented Bangladesh at the WTO since 2001.