To delink or not to delink? The President clarifies 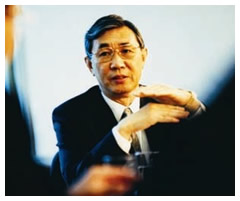 Has CityU made up its mind on how to deal with the looming crisis of the budget crunch, in the face of cutbacks in government funding? Is delinking our salaries from those of the civil service, with a consequential cut in our paychecks, already on the cards? If you have paid attention to what our President, Professor H K Chang, has said to the newspapers over the past few days, the answers seem to have been set in stone. In the news, he has agreed to a pervasive pay cut, with himself taking the lead. The reality, however, is bit more complicated than what has met the public eye.

In an impromptu interview with the President on 21 January, the CityU staff newsletter, Linkage, again asked the inevitable question: "Are delinking and a pay cut unavoidable?"

"It's no more than an option on the table at the moment," said Professor Chang, who repeated that no foregone conclusion has been made on how best to deal with the budget crisis. He said he told the press that CityU, as part of the community from which we draw our resources, is "obliged to do its bit" to help the government overcome the fiscal crisis. But he also said specifically that if the whole community has to work together to sail through the difficult times, he is willing, individually, to consider a pay cut. He did not wish his comment, however, would make CityU staff feel under pressure to take a similar view. The last sentence was omitted in the report.

In fact, the Management Board has reportedly met twice since Christmas and topping the agendas are the two issues of salary delinking and possible budget scenarios. The Board, according to Professor Chang, is still in the midst of the process of "gathering, analyzing information and sorting out the options," as any responsible managers should do, before identifying the solutions.

"Nobody likes tumultuous storms," the President explained, "but as captain of the CityU ship, I have the obligation to alert all my shipmates that a storm is looming nearer and nearer." But whether delinking staff salaries from the civil service will be effective needs to be studied in great detail. "Even if this policy is to be implemented," he said, "it doesn't necessarily mean a fixed percentage will be applied across the board." And certainly, cutting the salaries of the senior staff alone, the President emphasized, is not the only way out, despite what some have been led to believe by the news reports.

"What we need to do is to look at our work critically, to review what our core activities are, and what we are good at before deciding on any concrete plans," said the President. This will take the senior management around two more weeks; a set of guiding principles should be revealed after Chinese New Year.