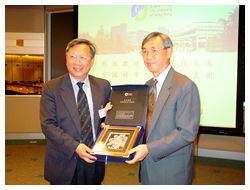 In an effort to strengthen academic ties with CityU, a delegation of scholars from the Chinese Academy of Sciences, led by Professor Lu Yongxiang, the President, visited CityU on May 22.

Professor Lu, who was conferred an Honourary Doctor of Science degree by CityU in 1997, said: "I feel like visiting my alma mater."

Greeted by a group of nine senior faculty members led by President H K Chang at the Multi-media Conference Room, the delegates watched a video introducing major developments at CityU. One impressed delegate, Professor Fu Jiamo, said: "Not only is CityU young and dynamic, it is also rich in cultural diversity." The delegates were then led on a tour of the Centre of Super-Diamond and Advanced Films by Professor S T Lee, and the Heavy Structures Laboratory, where Professor Michael Hung demonstrated his research into shearography. 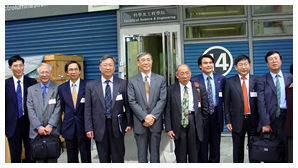 Delegates from the Academy comprised: Professor Wu Dexin, Professor Gan Fuxi, Professor Chen Kaixian, Mr Zhang Xinggen and Mr Liu Fengsong. CityU Professor David Tong, from the Department of Physics and Material Sciences, who was named an Academician of the Chinese Academy of Sciences for his contributions to the study of surface physics and nanotechnology, was also among the reception team.