Hong Kong's first formal institute dedicated to research on Southeast Asia was officially opened by the banging of a ceremonial gong by CityU President, Professor H K Chang, and Professor Wang Gungwu, a world authority on Southeast Asian studies. Guests, including the Consuls-General of Indonesia, the Philippines, Malaysia, Singapore and Myanmar, and the Deputy Commissioner of the Chinese Ministry of Foreign Affairs, were present for the inauguration of CityU's Southeast Asia Research Centre (SEARC) on 27 February 2001. 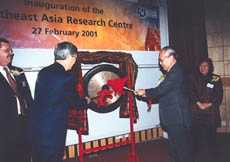 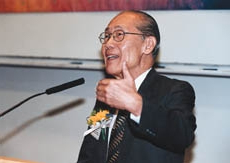 and Southeast Asia", Professor Wang spoke about the evolving relationship between China and Southeast Asia and the unique role Hong Kong, as an international city, can play in promoting links between the region and the rest of the world.

SEARC, CityU's 10th faculty research centre, will adopt a comparative, interdisciplinary and holistic approach to its theme of "remaking Southeast Asia in a global context: cultures, development and challenges." 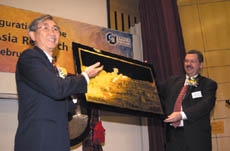 The Centre's Director, Professor Kevin Hewison, said SEARC's research programmes would examine the effects of globalization on the region, the various schisms lying beneath the surface of Southeast Asian relations, and the interactions between the peoples, communities and nations.

Professor Hewison joined CityU last year from the University of New England, Australia, where he held the Foundation Chair of Asian Studies. He has spent a large part of his career as a development consultant with various non-governmental organizations, development agencies and a range of private consulting firms specializing in rural infrastructure and social impact studies. Much of his work has been in Southeast Asia, but he has also worked in other developing nations such as Pakistan, the Maldives and Mozambique.

As head of the only research centre in Hong Kong with a mission to advance Southeast Asian studies, Professor Hewison said SEARC will focus on exploring the dynamics of change in the region, including the long-standing social, cultural and economic ties that underlie the relationship between Hong Kong and Southeast Asia.