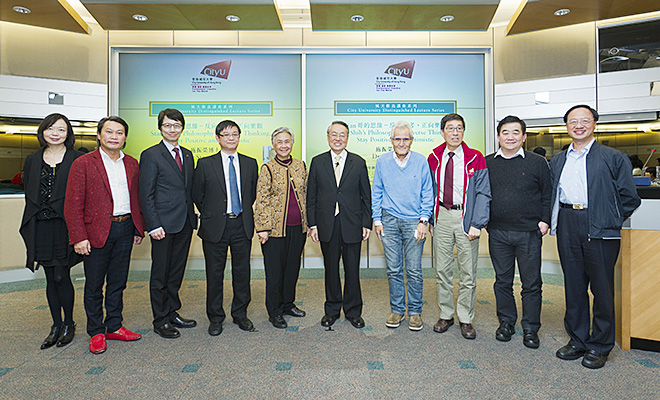 Photo of Dr and Mrs Shih (5th and 6th from right) with CityU representatives at the Distinguished Lecture.
Dr Stan Shih, the co-founder of Acer Group discussed the concept of reverse thinking and shared his way of success with teachers, students and alumni at a City University Distinguished Lecture, and a sharing session as well as a workshop under the theme “Wangdao for New Era” for senior alumni at City University of Hong Kong (CityU) on 17 and 18 February.
As an eminent business leader, Dr Shih has won numerous honours. He was named “Asian Hero” by TIME magazine in its 60th anniversary publication; referred to as a “visionary from Taiwan who has put the island on the global IT map” by CNN; and identified as one of “The 25 Top Managers of the Year” by Business Week and bestowed with the inaugural award of “One of the 10 Most Outstanding Young Persons in the World” by the International Jaycees.
He has also attended the Asia-Pacific Economic Cooperation Economic Leaders’ Summit in his capacity as Taiwan’s special envoy. Since 2005, he has served as Chairman of the Stans Foundation, which promotes sustainable business development. 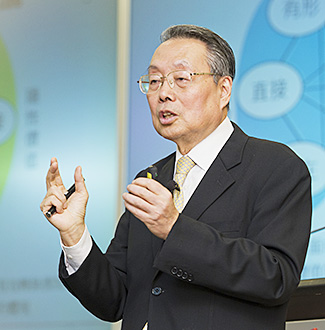 Dr Shih talked about reverse thinking at the distinguished lecture.
Nicknamed “Brother Stan”, Dr Shih began his lecture titled “Stan Shih’s Philosophy – Reverse Thinking, Stay Positive and Optimistic” on 17 February by talking about his youth. The lecture was hosted by Professor Lu Jian, Vice-President (Research and Technology) and Dean of Graduate Studies.
Dr Shih said his achievements today were due to his reverse thinking and having an optimistic attitude. Although he was admitted to the Department of Electronics Engineering at National Chiao Tung University in Taiwan, which was not his first choice of academic study, it gave him the chance to ride the wave of Taiwan’s fast development in the electronics industry. Even though the electronics company that he joined after graduation collapsed, he was inspired to set up Acer Group.
Dr Shih pointed out that we should not push too hard for success, as events were not totally controlled by us. Rather, we should keep on learning and be prepared to seize opportunities.
Although he has retired, Dr Shih continues to share his experience with others and offer suggestions for the wellbeing of society. His humourous and inspiring talk went down well with the 200 participants.
In his address, Professor Way Kuo, CityU President, said that the University was an excellent example of reverse thinking. CityU had overcome lots of hurdles to establish the School of Veterinary Medicine, setting a milestone for the development of veterinary medicine in Hong Kong, he said.
The Bachelor of Veterinary Medicine programme, set to launch in the coming academic year, has received overwhelming response from the local community. Also, donations to support CityU’s development have been increasing steadily, Professor Kuo added.
In the Celebrity Sharing Session organised by the Alumni Relations Office (ARO) in the evening of 17 February, Dr Shih delivered a talk titled “The Way to Survive in a Changing World”.
He pointed out that Wangdao (literally, the King’s Way) was originally about how an emperor ruled his country. Now it has become the philosophy of governance for leaders wanting to keep abreast with the ever-changing world. The key to Wangdao was to create values and establish a mechanism that could balance the interests of all stakeholders in a bid to achieve sustainable development for corporations, Dr Shih said.
He also said that the mode of operations at Acer Group, which Dr Shih founded in 1976, had shifted from research and development to manufacturing over the years. Later the Group established a brand for its products that was separate from its original equipment manufacturing business.
Now Acer had a presence in many countries, he said, which exemplifies the core meaning of Wangdao for evolution and changes, i.e., constantly creating new values and setting up a new ecosystem that offers incentives to all interested parties. It is necessary to adopt reverse thinking and a positive attitude to meet challenges and overcome bottlenecks in business operations, he said. 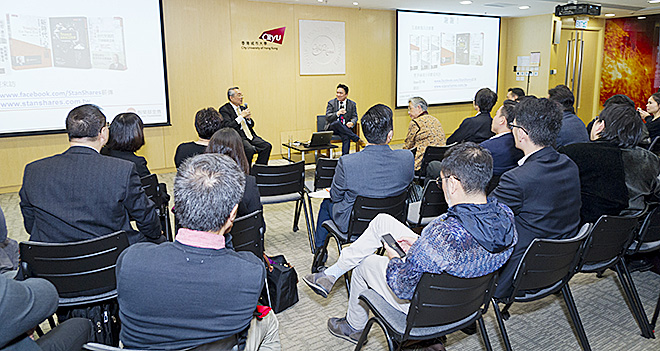 Dr Shih interacts with senior alumni at the Celebrity Sharing Q&A session.
Around 70 senior alumni actively interacted with Dr Shih during the Q&A session facilitated by Mr Clovis Lau Koong-yep, a member of the CityU Council and Chairman of CityU Convocation. Questions such as how to strike a balance between laissez-faire management and traditional-style management as well as the integration of altruism and egoism were asked.
Some alumni said they had been much inspired by Dr Shih’s previous workshop in Taiwan and that they appreciated their alma mater’s initiative to invite Dr Shih to give talks on campus.
The sharing session was also attended by Ms Jenny Chan Pik-ha, a member of the CityU Court, Mr Nelson Yip Siu-hong, Honorary Fellow of CityU, Professor Kuo, Professor Matthew Lee Kwok-on, Vice-President (Development and External Relations), Ms Kathy Chan Yin-ling, Associate Vice-President (Development and Alumni Relations), and Ms Alice Chan Yuen-ching, Acting Director of ARO.
Dr Shih’s one-day management workshop “Using Smile Curve to Set Foot on One’s Own Wangdao” on 18 February attracted more than 60 senior alumni. Dr Shih proposed the “Smile Curve” in 1992 as a way to create values for business. The curve shows various additional values created by different areas of industry. For example, values created by research and development and sales and marketing were higher than those created by assembly and manufacturing, he said.
At the workshop, Dr Shih explained how he used the “Smile Curve” to consider creating values and reviewing the development of industry in the new economic era. He also gave away free copies of his book Wangdao for New Era to workshop participants.

Dr Shih and senior alumni give the thumbs up at the one-day management workshop.