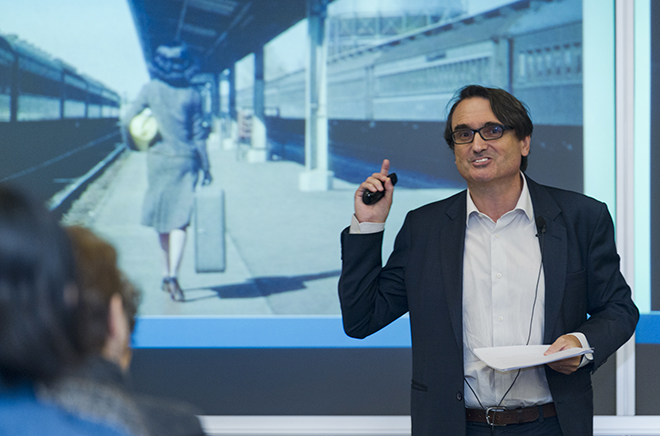 Professor Allen referenced Hitchcock’s film Marnie in his talk.
Hitchcock, Bollywood, Wittgenstein, Aristotle, the Finnish philosopher Georg Henrik von Wright and the work of the fourteenth-century Italian painter Giotto featured in a thought-provoking lecture titled “Science, Art and Humanistic Understanding”.
Professor Richard Allen, Dean of the School of Creative Media and Chair Professor of Film and Media Art, was speaking on 31 October at the latest installment of the “The President’s Lecture Series: Excellence in Academia”.
An expert on film theory, poetics and aesthetics, he explored how art was essential to human self-understanding and for reflecting on the role culture plays in shaping humanity.
While he did not for one moment consider that science was not essential to human life, he articulated a position that humanistic understanding cannot be reduced to the kind of objective rational analysis found in scientific disciplines.
Part of his argument was that a great deal of art is so complex that it can only be comprehended by shared understandings grounded in language and culture.
For example, irony, i.e., when you say one thing to mean another, exemplifies the complexity of human communication. 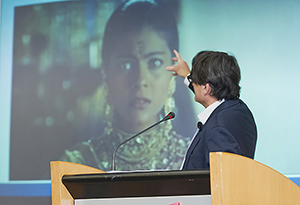 Professor Allen is also researching Bollywood.
As an illustration, Professor Allen deconstructed the opening scene of the Hitchcock movie Marnie to reveal a teasing exploration of identity and sexuality by focusing on the famous yellow handbag and the way the character walks along the station platform.
In one shot, Hitchcock, whose work Professor Allen is a world authority on, conjures up the film’s main themes, using irony that might well be lost on audiences unfamiliar with the cinematic devices used.
Similarly, Professor Allen explored a scene from Hindi cinema, a subject that Professor Allen is currently researching, that was embedded with a cinematic device in which characters recognise past life memories. Such a technique might leave audiences bewildered unless they are familiar with the complexity of melodrama and its idioms used in Bollywood cinema.
Film art, Professor Allen argues, cannot easily be measured in terms of social impact or knowledge creation unlike other academic fields. Rather, it should be framed in the light of human exploration of meaning and a greater understanding of ourselves.
For more about Professor Allen’s work, visit here.
​​​​​
​​​​