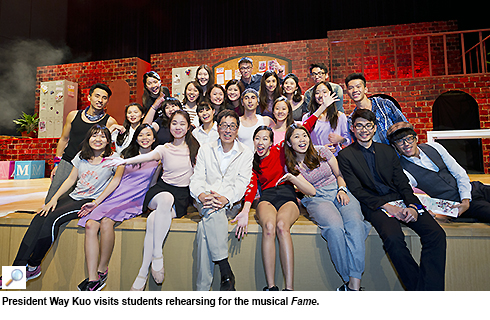 The CityU Arts Festival 2016, now in its second year, is an essential part of the University’s efforts to promote the arts, according to Professor Way Kuo, President of CityU, in his welcoming remarks.
Other officiating guests at the ceremony were Professor Horace Ip Ho-shing, Vice-President (Student Affairs); Dr Ron Kwok Chi-wai, Dean of Students; and Dr Wong Chi-tim, Director of Student Development Services.
CityU students staged the musical Fame as part of the 2016 CityU Arts Festival to a packed audience of 1000 at Wong Cheung Lo Hui Yuet Hall on 9 and 10 November.
The musical describes the joy, tears and anxieties of a group of students studying at a fictional performance academy. These feelings resonated with the student performers and the audience over the two nights.

Despite the short but intense 4-months of rehearsal, with many of the actors first-timers, the quality of the dancing, singing and acting was well received by the audience, and brought Fame to the University.
The festival, which was organised by the Cultural and Sports Committee of the Office of Vice-President (Student Affairs), runs from 26 October through to 16 November. Programmes include:
·         “City Melodies of Love” Vocal Concert (26 October)
·         CityU Choir with the Lingnan Girl Choir from Xinghai Conservatory of Music (3 November)
·         HD Screening of Metropolitan Opera – Turandot (4 November) and Les pêcheurs de perles (5 November)
·         The musical Fame performed by CityU students (9 & 10 November)
·         CityU Chinese Orchestra with Xinghai Conservatory of Music (12 November)
·          “Music Dreams Come True” Concert by CityU Philharmonic Orchestra, Yao Jue and Hong Kong String Orchestra (16 November)
For more information, please visit http://www.cityu.edu.hk/ctspc/events#artsfestival2016. 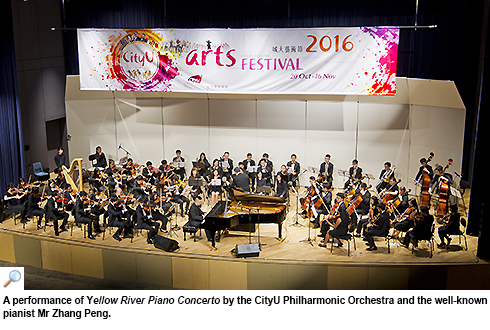