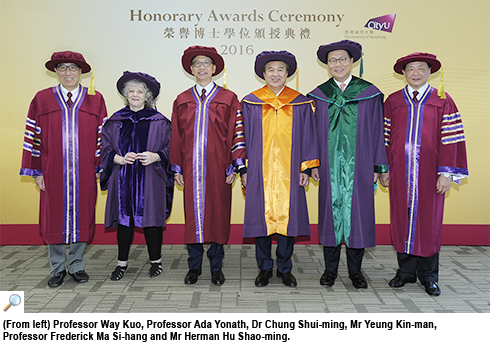 City University of Hong Kong (CityU) conferred honorary doctoral degrees on Professor Frederick Ma Si-hang , GBS, JP,  Mr Yeung Kin-man , JP and Professor Ada Yonath , in recognition of their significant contributions to education and the well-being of society. The award ceremony was held on 13 October. Dr Chung Shui-ming, University Pro-Chancellor, presided over the ceremony.
Mr Herman Hu Shao-ming, Council Chairman, and Professor Way Kuo, President, also attended the ceremony.
In addressing the congregation on behalf of the honorary graduates, Professor Yonath thanked CityU for the honour and said all the three honorary doctors set for themselves significant goals and to perform their utmost in reaching them. To conclude her speech, she said, “CityU is among the highest in Asia for citation in the past three years. Consequently, all three awards are bestowed in recognition of our significant contributions to humanity, to advancing enthusiasm for creativity and to increasing the respect for knowledge among the younger generation. These are great human principles and I am certain CityU will continue to show its appreciation to such values.”
In his speech, Professor Kuo thanked the graduates for joining CityU. “Our honorary graduates join us at a very exciting point in our development as an institute of higher education. We have recently announced excellent news in terms of funding and research, and also in student achievement in the academic as well as the sporting side to life. These items of good news are wonderful complements to the great honour that Professor Ma, Mr Yeung and Professor Yonath have paid CityU by accepting our honorary awards.”