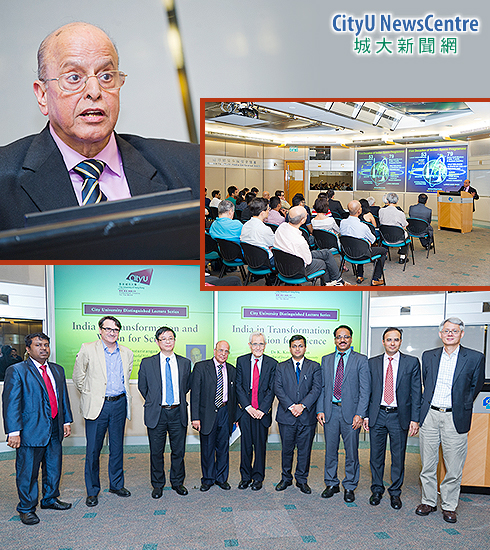 India realises that a stronger intervention from science and technology (S&T)-related endeavours is imperative for a sustainable socio-economic development under high GDP growth rates, according to an Indian engineer specialising in science policies.
Dr Krishnaswamy Kasturirangan, Chancellor of Jawaharlal Nehru University, was delivering a lecture titled “India in Transformation and Vision for Science” as part of the City University Distinguished Lecture at City University of Hong Kong (CityU) on 20 May.
India recognised that, as investments in S&T in India were increasing, the role of S&T in national socio-economic development would be an integral part of planning and implementation, he said.
In addition, India’s increasing and multiple developmental demands with limited resources made it necessary to integrate innovation with the S&T policy for ensuring sustainability and inclusivity, he added.
In fact, it is no longer a question of whether or not S&T and innovation should be an integral part of a development strategy but whether the India of today can afford to ignore it.
Dr Kasturirangan holds the Satish Dhawan Chair for Engineering Eminence of the Indian National Academy of Engineering. He is a Fellow of various science Academies of India and an Academician of the Pontifical Academy of Sciences of the Vatican.
He has won the three highest civilian honours of India. He is also Officer of the Legion of Honour of France and has received the Brock Medal, Allan D Emil Memorial Award and Theodore Von Karman Award.