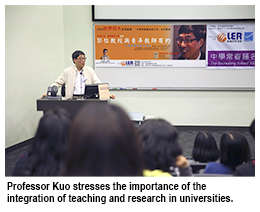 The President of City University of Hong Kong (CityU) shared his views on education with secondary school teachers in a seminar on 14 April.
At the event, which was part of the Top Secondary School Alliance Project organised by the Hong Kong Liberal Education Research Association, Professor Way Kuo also presented his new book The Soulware within Higher Education.
In the talk, he said many individuals who did not possess top academic qualifications had excelled in fields such as politics, commerce and science. For example, Chinese scientist Tu Youyou had won the Nobel laureate in medicine but she does not have a doctorate degree. Also, former US President Ronald Reagan did not graduate from an Ivy League university. 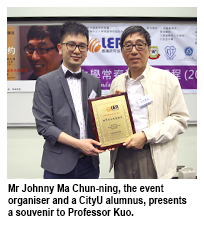 This did not mean that education was useless, Professor Kuo said, but that a huge gap between knowledge acquisition and a university degree existed today.
Professor Kuo suggested that educators should try to minimise that gap so that university degrees would not be just a “paper certificate” but would truly reflect the knowledge attained by graduates.
Furthermore, universities should integrate teaching and research, and enable students to apply their knowledge so as to maximise education effects.
During the Q&A, Professor Kuo said a thorough understanding of concepts and knowledge was the key to education, adding that students should explore their real interests and capabilities in order to further develop themselves.
Many vice-principals and teachers from secondary schools of Hong Kong, Shenzhen and Dongguan participated in the seminar.