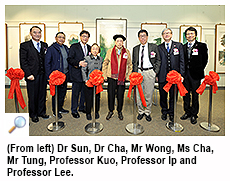 More than 50 spectacular Chinese landscape paintings are being displayed in the “Exhibition – Tranquil Paradises: Chinese Paintings by Stewart Wong” at the Singing Waves Gallery in City University of Hong Kong (CityU) from 11 March to 10 April.

The paintings are selected works by Mr Stewart Wong Sue-toa, Managing Director of Hanison Construction Holdings Limited. Mr Wong started to learn Chinese painting at a young age from renowned painters. His works have been shown frequently in prestigious galleries and museums in the mainland in recent years.

At the ceremony Mr Wong said he was delighted to have the opportunity to exhibit his art at CityU, while Professor Kuo thanked Mr Wong for his staunch support for the University’s development. He praised Mr Wong for being an outstanding architect as well as an artist who can integrate science with art.

Mr Wong donates to the University in the name of his own or his company. The name “Singing Waves” actually comes from the Chinese names of Mr Wong and Dr Cha: “Toa” from Mr Wong meaning “waves”, and “sing” from Dr Cha.