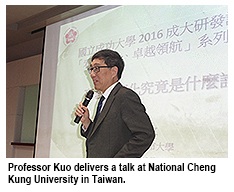 In a roundtable meeting, representatives of the two universities discussed various issues relating to university governance, in particular how to align with education, research and internationalisation initiatives at major universities around the world. 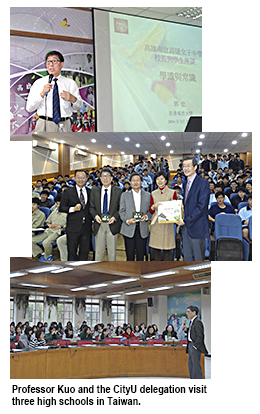 In addition, Professor Kuo delivered a talk titled “What Does It Really Mean by Internationalisation for Higher Education Institutions?”

It was the first lecture in the 2016 NCKU “Research and Development Forum” Lecture Series.

For example, Chinese scientist Tu Youyou, the Nobel laureate in medicine, did not have a doctorate degree, yet she had contributed significantly to the world, he said.

He related how CityU admitted outstanding students from Taiwan every year, while Ms Wang and Mr Wang explained how opportunities to interact with overseas students during their studies at CityU had helped them to secure jobs immediately after graduation.