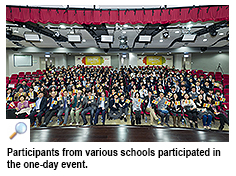 Around 200 students from 17 high-calibre secondary schools participated in the “Discovery & Innovation Debating Challenge” programme at City University of Hong Kong (CityU) on 30 January.

The one-day event was organised by CityU and Young Post, South China Morning Post for the third year running.

In his welcoming remarks at the opening ceremony, Professor Arthur Ellis, Provost of CityU, introduced the students to CityU’s Discovery-enriched Curriculum (DEC) and the importance of innovation and discovery. 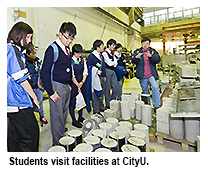 “Under the DEC, all our students are encouraged to discover for themselves new knowledge. It doesn’t matter what major you are taking; we want all our undergraduates to make their own discovery while they are studying at CityU,” Professor Ellis said.

To experience the innovative learning environment at CityU, participants were divided into teams for a tour of CityU’s facilities and laboratories, including the Gateway Education (GE) Laboratory, the DEC Laboratory, the Wind Tunnel, the Omnimedia Digital Newsroom, the Future Cinema Studio, and the moot court.

During the event, faculty members introduced the undergraduate programmes, the characteristics of CityU’s colleges and schools, and information about career development. 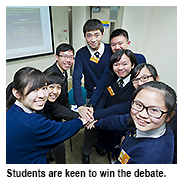 In addition, students attended a talk on further academic pathways conducted by the Hong Kong Federation of Youth Groups and a debating skills workshop hosted by an experienced debating coach.

The 17 schools then divided into nine groups and debated different motions relevant to their visit and talks. The adjudicators said they were impressed by the preparation and skillful performance of the debaters.

Kelvin Chu Sing-ip, a Form 5 student at Po Leung Kuk Laws Foundation College, said that he learned a lot from the other debaters, and that he was impressed by the well-equipped facilities at the School of Creative Media.

Michelle Retrato Maninggo, a Form 5 student at Marymount Secondary School, said it was the first time that she had visited CityU, and the event had enhanced her understanding and impression of CityU.