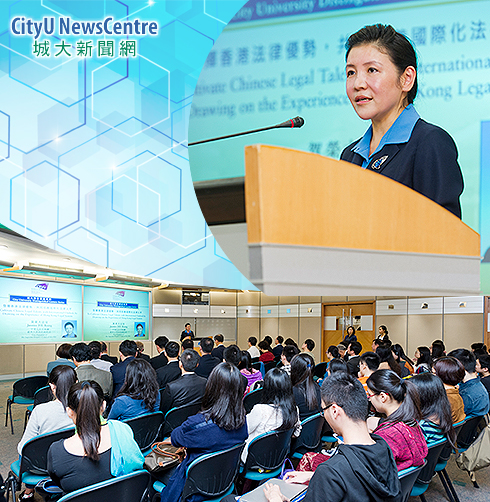 ​Justice He Rong, Vice-President of the Supreme People's Court of the People's Republic of China (PRC), discussed how Hong Kong could use its experience to contribute to China’s legal system in her talk at the City University Distinguished Lecture Series on 25 November.
The title of her talk was “To Cultivate Chinese Legal Talents with International Outlook by Drawing on the Experience of Hong Kong Legal System”.
Concurrently a member of the Party Committee and the Trial Committee of the Supreme People’s Court, Justice He discussed how Hong Kong could utilise its strengths to promote the development of internationalisation for China’s legal system and create an international legal environment in China that has a global influence.
She pointed out that internationalisation of legal talent was an important key to the success of the above objective, adding that Hong Kong could play a major role as a participant and initiator in this project. One practical example cited was the collaboration between City University of Hong Kong and the National Judges College of the Supreme People’s Court of the PRC that has yielded fruitful outcomes through many years of close partnership.
Justice He also suggested that Hong Kong and the mainland should work closely together on legal research and a feasibility study for launching the project “One Belt, One Road” (Silk Road Economic Belt and the 21st Century Maritime Silk Road) as well as the “two-way open policy” for capital markets in and out of China. For instance, Hong Kong and the mainland should strengthen the theoretical research of foreign countries’ related commercial and maritime trials and explore the feasibility of establishing a regional dispute resolution centre that has international influence.
Before the end of the talk, Justice He suggested fostering judicial collaboration and legal research between Hong Kong and the mainland through information exchange.