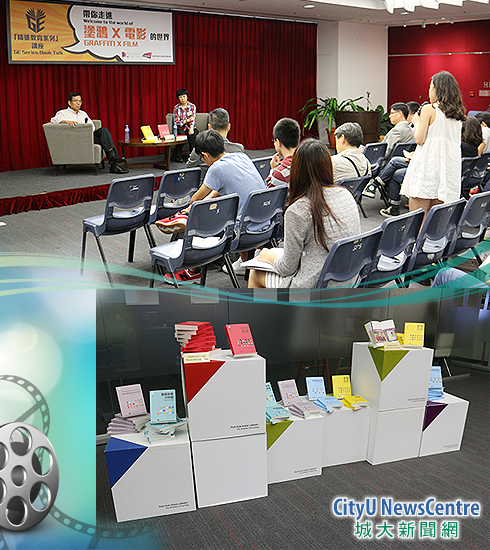 ​
A book talk about graffiti and Hong Kong’s independent documentary industry attracted around 40 staff and students.
The book talk, held on 17 November, was titled “Welcome to the world of graffiti X film”. The event was part of the Gateway Education (GE) Series Book Talk co-organised by the City University of Hong Kong (CityU) Press and the Run Run Shaw Library.
Professor Chang Tsan-kuo of the Department of Media and Communication discussed the legality of graffiti under different contexts in Hong Kong, while Dr Louisa Wei Shiyu, Associate Professor of the School of Creative Media, gave a chronological account of Hong Kong’s independent documentary industry, highlighting on its recent flourishing.
Professor Chang is the author of Graffiti Hong Kong – Public Space, Politics and Globalization, and Dr Wei is the author of Cinema East and West. Both are teaching GE courses on these topics.
Professor Zhu Guobin, Director of CityU Press, and Professor Christian Wagner, Acting University Librarian, gave the welcoming remarks. The book talk was followed by a Q&A session.
CityU Press has been publishing the GE Series since 2012. With diversified and interesting topics, the series is aimed at igniting a passion for discovery and innovation, and contributing to the generation and application of knowledge.