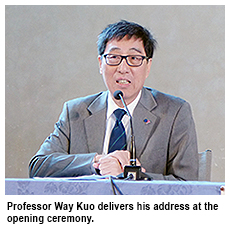 City University of Hong Kong (CityU) is showcasing its creative media artwork at the “Giuseppe Castiglione – Lang Shining New Media Art Exhibition” in Florence, Italy.
The opening ceremony and press conference for the exhibition, which has been organised by the National Palace Museum (NPM) in Taipei and the Opera di Santa Croce (Santa Croce) in Florence, was held at the Basilica of Santa Croce in Florence on 31 October. 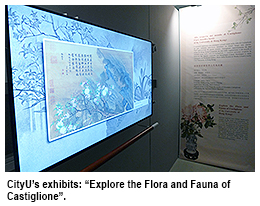 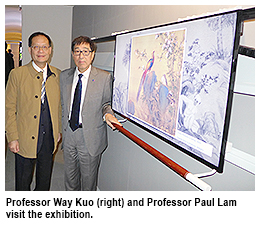 Chair Professor Jeffrey Shaw and other artists at CityU’s School of Creative Media developed a creative new media exhibit titled “Explore the Flora and Fauna of Castiglione” for this exhibition.
Through this exhibit, viewers can explore two virtual landscapes created in the style of Castiglione by moving a TV screen along rails mounted on a wall. By exploring these panoramas, brilliantly imagined by two Hong Kong artists and populated with plants, birds and animals in the style of Castiglione, the viewer can discover the original paintings.
Professor Kuo expressed his appreciation for the efforts made by NPM in presenting Castiglione’s exquisite works through innovative digital technology in his remarks. He said he was delighted that CityU had made use of its strengths in new media art and participated in this exhibition. 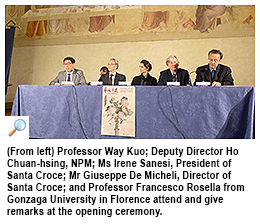 “The new-media exhibition brings together art and digital media that enables a physical and virtual presentation of Castiglione’s artworks,” he said. “Viewers can travel back in time to appreciate Castiglione’s aesthetic style from a fresh perspective and in a creative way.”
“We made Castiglione’s masterpieces come through information technology, which involves telecommunication,” he added. “In the past, people used to communicate through radio transmission, of which the father was Guglielmo Marconi. Coincidentally, a monument to Marconi also stands at the Basilica of Santa Croce. I am delighted that CityU had made use of its strengths in new media art and participated in this exhibition.”
Castiglione, an eminent court painter, architect and art designer, spent 51 years in the Qing Empire’s palace where he produced many excellent works during the reigns of Emperors Kangxi, Yongzheng and Qianlong.
Blending European techniques with China’s traditional artistic methods, his works have opened up a new perspective on Chinese painting and are greatly admired in China. 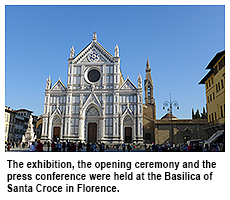 The Basilica of Santa Croce dates back to 1295. It is the burial place for many great Italians such as Michelangelo, Galileo Galilei, Niccolò Machiavelli and Gioachino Rossini. There is also a memorial to Dante Alighieri and Guglielmo Marconi there.
The exhibition will be held at the Basilica of Santa Croce from 31 October 2015 to 31 January 2016. Pope Francis plans to visit the exhibition as well.